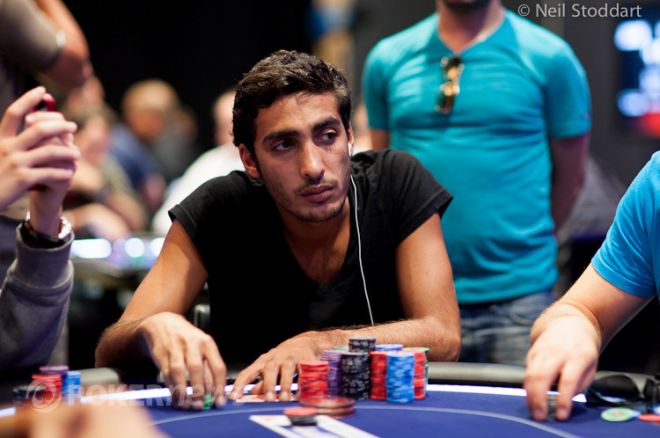 On Day 1a of the PokerStars.com European Poker Tour Barcelona Main Event, 403 players bought in for the €5,000 requisite. On Day 1b, however, the Casino de Barcelona was overrun with players — 670 of them — taking the total field over the one-thousand mark and making this tournament the biggest EPT ever held in Spain.

After eight hard-fought levels, 370 players remained and the chip leader was Guy Bachar who finished with 193,100 in chips. Samir Hadad (169,200) and Hila Dan Ionut (168,400) follow in second and third respectively. Bachar made a late charge to the top when took the chip lead in the last level of the day after knocking out Team PokerStars Pro Sandra Naujoks with

. Bachar's finish was still not enough to overtake Day 1a's Aku Joentausta who will head into Tuesday's Day 2 with the overall chip lead of 236,200.

Over 20 Team PokerStars Pros took part on Day 1b and the majority of them fared very well. Those who made an early exit include Dario Minieri, Jonathan Duhamel, Christophe De Meulder, Nacho Barbero and Bertrand “ElkY” Grospellier, who got it all in on a flop with a set of eights only for his opponent's pocket aces to outdraw him by the river. Johnny Lodden was forced to grind a short stack for most of the day but fell near the end of the day when he lost with

in a flip against

There were also a number of eliminations including Chino Rheem, who barely lasted a level; Dan Shak, whose kings were no match against Eddy Sabat's aces; and Praz Bansi's, whose return to poker after a five month break didn't end well — he lost with queens twice in quick succession and was sent to the rail. Chris Moorman, JP Kelly, former EPT winners Rupert Elder and Kevin MacPhee, Sam Chartier and Sunday's €50,000 Super High Roller runner-up JC Alvarado were also part of the eliminations on Day 1b.

The combined surviving players from the two starting fields will create a field close to 600 — will begin play at 1200 CET (0300 PDT). Follow along with the PokerNews Live Reporting Team for all of the live updates from this record-breaking EPT.