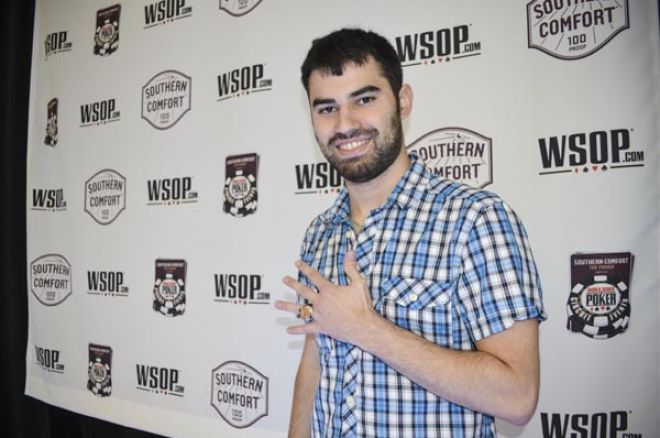 Six players returned for Day 3 of the World Series of Poker Circuit IP Biloxi Main Event presented by Southern Comfort 100 Proof. The tournament began three days ago with 300 hopefuls, and on Monday, Kyle Cartwright was the last man standing, tying Mark "Pegasus" Smith for the all-time ring record of five. For the win, Cartwright pocketed $107,992 and a seat to the circuit- ending National Championship.

The first casualty of the final table came when Dennis Pasentine opened for 60,000, John Dolan called and Cartwright raised to 143,000 from the big blind. Pasentine four-bet to 335,000, Dolan folded, and Cartwright moved all in. Pasentine called, tabled pocket jacks and then saw he was behind Cartwright’s pocket kings. Pasentine never improved and was eliminated.

and Johnson was ahead holding

. Johnson hit an ace on the flop, and despite having four to a flush on the turn, Cabrera bricked on the river.

The fourth-place elimination came when Cory Wood shoved from the big blind after an open-raise from Cartwright. Cartwright called and tabled

. The board ran out blank and Wood was eliminated.

Not more than 10 minutes later Cartwright opened for 60,000 on the button, Dolan made it 150,000 from the small blind and Cartwright called. Dolan held two over cards with

to Cartwright’s pocket sixes. The board ran

sending Dolan to the rail.

Heads-up play began with Cartwright holding a seemingly insurmountable chip lead. Johnson had just 625,000 to Cartwright’s 5.375 million. They got all the chips in the middle on the third hand of heads-up play. Johnson shoved on the button and Cartwright called holding two red jacks. Johnson held

and watched the board run out

That’s it for the first stop of the 2012-2013 WSOP Circuit presented by Southern Comfort 100 Proof. For an in-depth look at all the action from the WSOPC IP Biloxi Main Event, head over to the PokerNews Live Reporting pages. Next up on the WSOPC schedule is Horseshoe Bossier City, which begins on Sept 13.