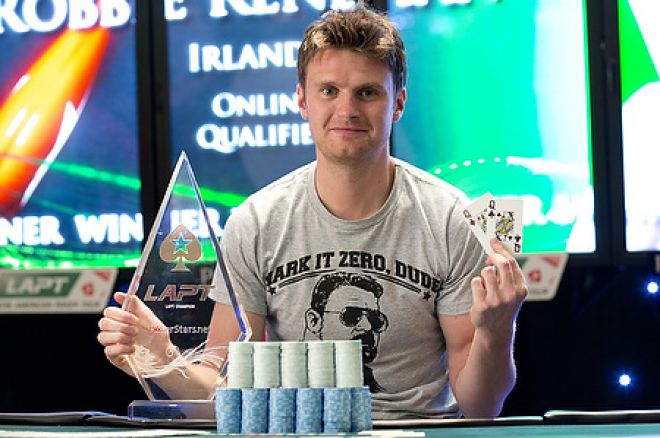 Five Colombians made the final table of the 2012 PokerStars.net Latin American Poker Tour Colombian National Poker Championship on Sunday. They were joined by a rock-solid Brazilian and a Spaniard who had more live tournament experience than the rest of the table combined. But an unheralded qualifier, Robbie Renehan of Dublin, Ireland, surprised everyone at the Allegre Casino in Medellin, Colombia by grinding his way home and claiming the top prize of 264,700,000 Colombian pesos (USD$147,877).

Last year, the CNPC was priced at a modest $1,100 and drew 681 players, exceeding the wildest expectations of tournament organizers but causing some tight quarters on the tournament floor. This year, the buy-in was increased to $2,500, helping to reduce the field to a more manageable 337 players. Forty-eight made the money, including a few Team PokerStars Pros: Angel Guillen of Mexico, who finished 47th for the minimum payout of $3,614, and Costa Rica’s Humberto Brenes, who continued his string of success on the LAPT by finishing in 22nd place ($5,028).

Renehan, 29, qualified for the CNPC on PokerStars. His previous live tournament earnings totaled less than $6,000. By making the final table, Renehan guaranteed a payout of triple those earnings because eighth place at the CNPC paid $17,441. But Renehan wasn’t interested in eighth place. He was patient in the early stages of the final table while other players were eliminated, and then used a timely knockout of his own to grab enough chips to begin to pressure other players.

On the final hand, Renehan’s heads-up opponent, Jayr Fregona of Brazil, moved all in with ace-eight. Renehan snap-called with pocket queens. Five cards later, he was the latest LAPT champion.

By all accounts, the LAPT’s return to Medellin was a success. The tour will seek to build on that success next month when it goes to Panama for the first time. From Sept. 26 to Sept. 30, Latin American poker action can be found at the Veneto Hotel and Casino in Panama City. Satellites are running now on PokerStars.