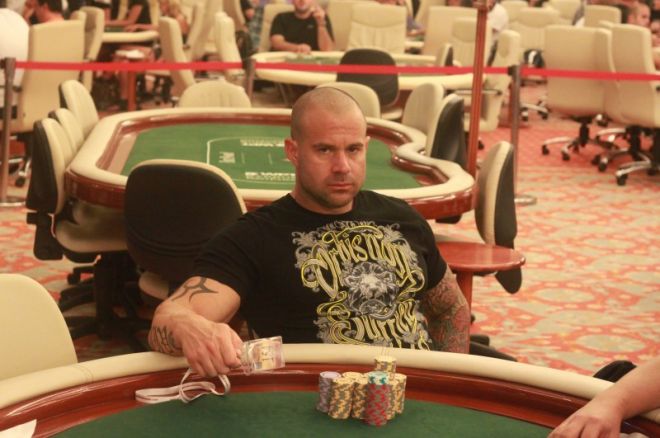 Day 3 of the World Poker Tour Merit Cyprus Classic began with 53 players and after four 90-minute levels (and 30-minutes of a fifth) there were only 18 players remaining who had chips. These 18 players will be lead into battle on Day 4 by Canadian pro Erik Cajelais and his stack of 1,190,000.

Cajelais already has a World Series of Poker bracelet to his name and he is now in pole position to add a coveted WPT title to his already impressive poker résumé. Throughout Tuesday's proceedings, Cajelais was the perfect example of how dangerous a poker player can be when they combine playing well with running well.

First he hit a flush on the river with

to crack the queens of double WSOP bracelet winner Oleksii Kovalchuk (and eliminated him in the process), then he made the call with

flop after Mansour Khorramshani decided to move all-in for 205,000 despite there only being 21,000 chips in the pot. Cajelais turned the flush. Finally, Cajelais managed to find a pair of red aces and called when Oleg Shepelenko moved in with what turned out to be pocket kings.

But let's not take anything away from Cajelais because it was not all about running well; he continually put himself into positions where he could win pots and he made a real nuisance of himself at each table he was seated at.

When play resumes at 1300 EEST (0300 PDT) each of the 18 players will be guaranteed at least $13,420 for their efforts. The money bubble burst midway through Day 3 when Germany's Marko Neumann committed his stack with

and was unfortunate to run into the

of Kemel Sevevi. With Neumann becoming the 37th place finisher, everyone who had chips in front of them locked up a payday of at least $8,070.

Some of the players who will not be returning for the penultimate day's action include Manig Loeser (33rd place), Dominik Nitsche (30th), David “Chino” Rheem (22nd) and Per Ummer (21st).

Join the PokerNews Live Reporting team from 1300 EEST (0300 PDT) as they bring you all of the action, as it happens, from the WPT Merit Cyprus Classic Main Event!