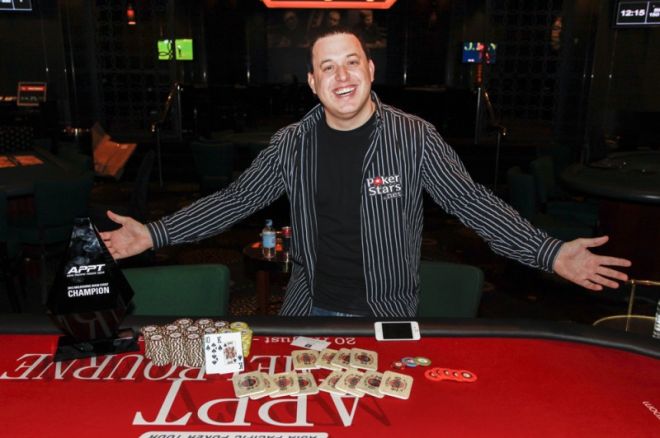 The 2012 PokerStars.net Asia Pacific Poker Tour Melbourne Main Event came to a close on Monday. In the end it was Britain's Sam Razavi who took down the trophy, all the glory and the $326,125 first-place prize.

Heading into the final day it was Tom Grigg who held the chip lead, but he had eight formidable foes ready to play poker. One of the players who was surely going to give Grigg a headache was Brendon Rubie, but in a surprising turn of events, Rubie would be eliminated in ninth place.

Rubie started the day with the fourth largest chip stack, but proved to be his own worst enemy. The beginning of the end saw Rubie move all in on the river of a

board after calling bets from Wayne Bentley on the flop and turn. Bentley called Rubie’s shove and showed

, enough to send Rubie’s cards into the muck, leaving Rubie as one of the short stacks. Shortly after the above hand, Rubie was all in holding

and couldn’t catch up, leaving himself with less than two big blinds. From there, it was a quick death for Rubie as Razavi dealt the final blow to his tournament life.

With Rubie out of the way, the short-stacked Nigel Andrews had managed a pay jump, but this is when his day would end. Andrews’ last hand saw him all in holding

. No help came for Andrews and it was all over in eighth place.

Following Andrews’ elimination, the bust-outs flew fast and fierce as Lunardi would find the door in seventh place, followed by James Bills in sixth. Lunardi’s elimination saw him three-bet to 165,000 holding

from the small blind, after Bentley opened the pot to 60,000 from the button. Back on Bentley and he moved all in holding

. Lunardi made the call and then made his way to the rail when no help came on the board. Bills’ last hand saw him open shove holding

and he received the call from Bentley in the big blind, who held

flop all but sealed Bills’ fate and with bricks on the turn and river, Bills was sent out the door.

Within an hour, three players had already been eliminated and one more would join Lunardi, Bills and Andrews on the rail. This time it was Australian Poker Hall of Fame member Gary Benson who would make his way to the exit. Benson’s bust-out hand saw him get all his chips in holding

on the river of a

, with the turned trips good enough to send Benson home in fifth place.

Eventually the action had to slow down and that happened during four-handed play. Grigg was still the table captain at this stage, managing to hold almost half the chips in play for a short period. Play continued to slow to crawl, but eventually, after more than two hours, another player hit the rail. The fourth-place elimination began when the action was folded to Bentley in the small blind and he raised it up to 120,000. Grigg called out of the big blind and both players checked the

turn, Bentley check-raised all in after Grigg bet 130,000. Grigg made the call and turned over

, which was ahead of Bentley’s

on the river wasn’t what Bentley was looking for and he was sent to the rail in fourth place.

The chips were relatively even during three-handed play, with all three players holding a slight chip lead at least once. Then, Grigg surged away, building his stack to well over half the chips in play. However, it just wasn’t Grigg’s day as two hands would see Razavi deal the fatal blow to Grigg in third place. The first hand saw Grigg make a big river call when he ran into Razavi’s full house and the last hand of Grigg’s night would play out like so.

Grigg was in the small blind and raised it up to 100,000. Razavi called out of the big blind and the dealer turned over a

flop. Grigg led for 105,000 here and Razavi called. When the dealer flipped over a

turn, Grigg again bet, this time sliding out 215,000. Razavi made another call and the

completed the board on the river. This time Grigg checked and Razavi announced all in, having Grigg covered. Grigg thought for a long time, before eventually making the call. Razavi gave a fist pump and turned over his [5d55h], with another full house sending Grigg out the door.

Razavi held a more than 3-1 chip lead heading into the heads-up battle and it would take under ten minutes for him to eliminate Keith Walker in second place. The final hand of the tournament began with Razavi opening the button to 100,000. Walker then shoved all in and Razavi made a quick call, turning over

. Walker was in front with his

board would give Razavi the flush and eliminate Walker in second place and crown Razavi as the victor.

Just because we're done here, doesn't mean the live reporting stops. PokerNews' worldwide Live Reporting Team is constantly all over the globe providing updates from the biggest and best tournaments on the circuit, so be sure to check those events out as well. We'll see you at the next stop.