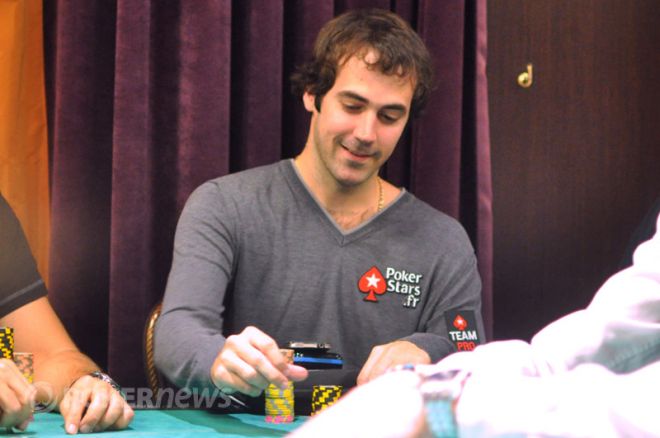 The most anticipated day on the calendar for many online poker pros is when the PokerStars World Championship of Online Poker (WCOOP) Main Event kicks off. That day was yesterday, and a field of 1,825 took part in the biggest online poker tournament of the year. Day 1 action ended just 20 spots shy of the money bubble, and leading the way is Mike "munchenHB" Telker.

Meanwhile, Team PokerStars Pro Jason Mercier earned the lone WCOOP bracelet on the up for grabs on Sunday, topping the field in the 8-Game High-Roller event for $253,425.

flop. "e1mdopp" bet 900 with only Reinkemeier tagging along to see the

turn. Another bet came from "e1mdopp," this one for 2,150. Reinkemeier called once again, and the

for aces full of fours. Reinkemeier's

was second best, ending his WCOOP Main Event during the first level.

Defending champion Thomas "Kallllle" Pedersen bowed out during Level 10. With the blinds and antes at 200/400/50, Pedersen min-raised to 800 from the hijack. A three-bet to 1,985 came from "theMakdiesel" out of the cutoff. Action folded back to Pedersen who re-raised all in for 9,047. "theMakdiesel" called and revealed

. The flop, though, came down

to give Pedersen a flush draw. However, he found no help from the

, but the board ran out

to give "slv458" a set of sixes to send Mercier to the rail.

Here's a look at the top five stacks entering Day 2:

Among the many notables still in the field are:

Making a deep run in the Sunday Kickoff was Mickey "mement_mori" Petersen, but the Team PokerStars Online member was eliminated in 27th place for $626. After a heads-up deal at the final table,"kjoffen" got the better of "kudos87" to notch the win.