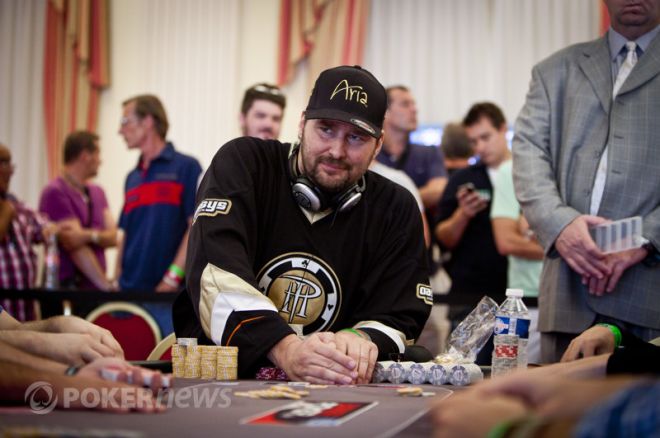 The 2012 World Series of Poker Europe continued on Wednesday with Day 4 of the €10,450 No-Limit Hold'em Main Event where Phil Hellmuth distanced himself and now headlines the final table as chip leader. In addition, the €50,000 Majestic High Roller continued with Day 2 action as some of poker's most notable players competed for a €1,000,000 first-place prize. Find out about these stories and more in our recap thanks to PokerNews' coverage sponsored by PartyPoker.

It was a quick day at the WSOP Europe Main Event on Wednesday as the final 24 players returned to battle for a coveted spot at the final table. After a flurry of big pots and dramatic eliminations, the official final table was set with none other than 12-time WSOP bracelet winner Phil Hellmuth leading the way.

After the final 24 players took their seats, play began fast and furious and never relented as the day wore on. The players to bust before the final two-table redraw at 16 were able to earn a payday of €26,611. Those to see the exit included Joe Kuether, Vladislav Varlashin, two-time WSOP bracelet winner Andy Frankenberger, Vadzim Markushevski, [Removed:138], Joe McGown, Liv Boeree and Curt Kohlberg.

Boeree came in to play focused and poised to make a deep run. However, the deck seemed to have it out for Boeree, and during the second hand of play she ran

for a solid chunk of her stack. She was able to recover from that hit, but she eventually saw her tournament life end at the hands of Joseph Cheong.

Cheong opened with a raise and Boeree three-bet all in for 272,000. Cheong called with

only to find that he was behind Boeree's

. The flop and turn were safe for Boeree, as they fell

to the felt. The river, however, spelled disaster — the

— pairing Cheong's ten and sealed the deal on Boeree's tournament.

Kohlberg was eliminated immediately after Boeree, and his elimination sent a shock wave throughout the room that prompted players from every table to stand up and watch the action. Kohlberg opened with a raise to 30,000 from under the gun and Hellmuth three-bet to 180,000. Action folded back to Kohlberg and he wasted no time announcing that he was all in for roughly 900,000. "What did he say? All in?" said Hellmuth. "I call!" Hellmuth shot out of his chair and tabled

and was in dire need of some help. The flop brought Kohlberg hope, however, as it fell

, giving him an open-ended straight draw. Hellmuth took one look at the flop and stormed away from the table. The

rolled off on the turn, giving Hellmuth a set but Kohlberg was still drawing live going to the river. Fifth street was paint, but unfortunately for Kohlberg it was the

, pairing him up and securing his elimination in 17th place.

The next two players to go took home a prize of €32,356 for their efforts. Max Silver, who finished eighth in this very event last year, fell at the hands of Cheong when he called all in with two pair against Cheong's made straight. David Benyamine was the next player to see elimination when he ran into the full house of Sergii Baranov.

Kyle Julius and Toby Lewis were the next two to go and finished in 14th and 13th place respectively. Julius and Lewis took home €40,320. The 2005 WSOP Main Event runner up Steve Dannenman was the next to see his tournament come to an end. Dannemann rode the short stack for most of this tournament and finally moved all in from the button holding two nines. Cheong woke up with pocket jacks in the big blind and the jacks held, sending the always smiling Dannenmann home in 12th place.

Nicolas Cardyn and Scott Seiver were the next two to be eliminated, and the exit of Seiver prompted a full redraw for the unofficial final table of nine. Play for the day almost came to a close when Timothy Adams moved all in and was dominated by Hellmuth. Fortunately for Adams, he was able to spike a ten on the river to double up.

The table then engaged in two rough hours of poker where many chips exchanged hands and and short stacks doubled up. Finally, Adams became the final table bubble boy by getting his entire stack in the middle with

. Adams was unable to improve, and he was forced to settle for a ninth place finish.

Play will resume on Thursday at 1345 CEST (0745 EDT). Due to live television scheduling, the players will play until four players remain and then take a break until 2145 CEST (1545 EDT) when they will resume and play until a winner emerges. Be sure to stay tuned to PokerNews as we provide updates from the exciting conclusion to one of the most prestigious events of the year!

On Wednesday, Day 2 of the €50,000 Majestic High Roller finished up and just nine players remain. It was a long day on the felt resulting in another early-morning finish, but one that was very exciting. When things were all wrapped up, John Juanda led the pack with 2.596 million in chips.

Plenty of notable players began the day still in contention for the title, and there were even a few late entrants. Both Phil Ivey and Jonathan Duhamel were two of the players to enter at the beginning of the day, and overall the field size grew to 60 total entries (49 players and 11 rebuys). Daniel Negreanu, Sam Trickett and Tony G were some of the others returning to action on Day 2.

All five of those aforementioned players failed to make to through to Day 3, which also meant they didn't make the money. After tallying up all the buy-ins, a prize pool of €2.88 million was announced with €1 million going to the winner. The top eight spots were set to be paid.

As play closed in on the final table, Marvin Rettenmaier was eliminated in 12th place, Fabian Quoss in 11th place, then Scott Seiver in 10th place. The final nine players redrew to one table and were going to play it out until the bubble burst and just eight remained. There was a change of plans, though, and the players opted to stop at the end of Level 17. The schedule is to return Thursday at 1500 CET (0900 ET) and play down to a winner.