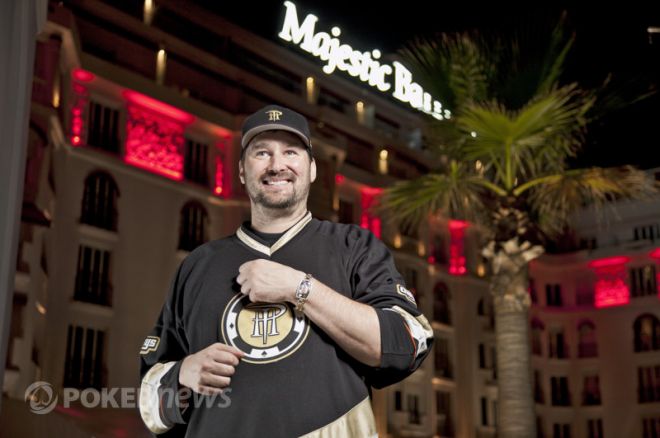 The 2012 World Series of Poker Europe concluded on Thursday by crowing champions in both the €10,450 No-Limit Hold'em Main Event and the €50,000 Majestic High Roller. Find out about these stories and more in our recap thanks to PokerNews' coverage sponsored by PartyPoker.

Earlier in the summer Phil Hellmuth was able to silence the critics when he won his 12th World Series of Poker bracelet. Less than four months later Hellmuth was able to overcome a field of 420 players to capture his 13th bracelet as well as the €1,022,376 first-place prize money. Not only does this win extend Hellmuth's lead as the player with the most WSOP titles, but it also made him the only player to ever win both the WSOP Main Event and the WSOPE Europe Main Event. It is the perfect cap to Hellmuth's WSOPE, as he managed to score an impressive four cashes during the seven-event series. As if all of that weren't enough, this win also puts Hellmuth in the lead for the WSOP Player of the Year race.

The path to glory was not an easy one for Hellmuth. Over two starting days, 420 players took to the felt, but by Day 5 the field had been whittled down to the final table.

Jason Mercier went into the final table as the short stack and did not have much wiggle room while seated at a table that seemed to be playing big pots. Mercier became the first casualty when he moved his stack of 465,000 all in from middle position only to be called by Sergii Baranov from the next seat over. The rest of the table folded and Mercier showed

only to find that he was dominated by Baranov's

. The room watched anxiously as the board fell

, thus sealing Mercier's fate as the eighth-place finisher. Mercier finished in fifth place in this event three years ago, and unfortunately was not able to best that finish in 2012. He did, however, collect a €84,672 payday for his finish.

Not long after, Stephane Girault three-bet his short stack of 300,000 all in over the top of a raise to 60,000 by Joseph Cheong that was also called by Hellmuth. Cheong got out of the way, but Hellmuth opted to call.

"I've got a good feeling about this one," said Hellmuth before the cards came out. The flop fell

, and it seemed that Hellmuth may have spoken too soon. The deck seemed to hold true to Hellmuth's gut feeling, as the

fell on the turn giving him an open-ended straight draw. The

made his straight on the river and sent Girault home in seventh place.

Paul Tedeschi was the next to see his tournament come to an end when he moved all in for his last 470,000 and was called by Cheong.

The flop brought Tedeschi a diamond draw as it fell

. The turn and river, however, were neither aces nor diamonds, but rather the

, which allowed Cheong's queens to hold and ensured Tedeschi a sixth place finish. Tedeschi's performance in this event netted him his largest tournament score to date, pocketing a €149,184.

Christopher Brammer was crippled after he called the all in of Stephane Albertini. Albertini held

. Brammer paired his ace on the flop, but ultimately ran into a heart flush on the river for Albertini. Brammer moved all in from the button a few hands later and was called by both Baranov and Hellmuth. Brammer held

on the board of

After Brammer's elimination, the players took a four-hour break due to television scheduling. When they came back, they played four-handed for quite some time until the action at the table came to a head. Cheong raised to 115,000 before the flop and was called by Albertini and Baranov. The flop fell

and Albertini checked. Baranov bet 225,000 and Cheong quickly announced that he was all in. Albertini folded and Baranov quickly called.

Cheong needed to fade a king or a diamond to stay alive in the tournament. Unfortunately that simply was not in the cards, as the

rolled off on the turn to give Baranov his flush. The

completed the board and Cheong was eliminated in fourth place, taking home €292,320 for his efforts.

The remaining trio of players then played for almost two hours, exchanging chips and letting emotions fly as they did so. After crippling Albertini in a prior hand, Hellmuth finally opened with a raise to 320,000 from the small blind. Albertini moved all in for about 900,000 and Hellmuth snapped him off with

. Albertini was ahead with

and looking to score a double up. The flop and turn were safe as they came

. The room let out a collective gasp of shock though when the

drilled the river, giving Hellmuth the winning set and eliminating Albertini from the tournament. This elimination brought about heads-up play where Hellmuth had a commanding chip lead.

The heads-up battle did not last long. Hellmuth seemed to take no prisoners as he raised a majority of the bets that Baranov made. A few hands into heads-up play saw Baranov limp from the button, Hellmuth raised 300,000 on top and Baranov replied by moving all in. Hellmuth quickly called.

Hellmuth turned to his supporters on the rail as he could not bear to watch the cards fall. The flop was

and still Hellmuth did not look. The

came on the turn and paired both players, giving Baranov a glimmer of hope with some additional outs to chop. Unfortunately for Baranov, he did not pair up or hit his chop outs, as the

struck the river, sending Hellmuth into the air as he jumped up and down with sheer joy.

The win put Hellmuth at the top of the leader board for WSOP of the Year. The only way that Hellmuth will be overtaken is if Greg Merson is able to win the final table of the WSOP Main Event at the end of October.

"This is the best tournament I've ever played in my entire life," Hellmuth said after winning his thirteenth bracelet. "I was all in for my tournament life once and that was on Day 1. He had one out."

The €50,000 Majestic High Roller concluded on Friday and Mike Watson emerged victorious from the 60-entry field for a cool €1 million.

This field attracted 49 players with 11 rebuys being added to the prize pool. A buy-in of €50,000 was required for each entry, and a prize pool of €2.88 million was generated. With the top eight spots set to pay out, Day 3 was not only going to see a winner crowned, but also the bubble burst.

Nine players came back for Day 3, but unfortunately for Winfred Yu, he was the last one to leave empty-handed. On his final hand, Yu lost with pocket eights versus Philipp Gruissem's

thanks to a ten on the river. With the final eight all guaranteed at least €115,000, it was time for eliminated players to hit the payout desk.

First to go was David Benefield, then Steve O'Dwyer, Jani Sointula and Tobias Reinkemeier in that order. After Reinkemeier headed out the door, Gruissem hit the rail before play continued for a little bit longer and then the players went on a 75-minute dinner break. At the break, Watson held the chip lead with John Juanda in second place and Richard Yong in third.

Within a few hands back from dinner, Yong had the chip lead and was mashing away. But then, he picked up ace-king on back-to-back hands and doubled up both of his opponents; first Watson, then Juanda. That left Yong as the short stack once again and he was bounced from the tournament shortly thereafter.

When heads-up play began, Juanda had 4.83 million in chips to Watson's 4.17, making things fairly close. Juanda inched out at first, but then a massive collision of stacks occurred. Juanda held

, but a jack on the turn gave Watson just the ingredient he needed for the double up. With that pot, Watson took a huge lead and knocked Juanda to under 10 big blinds. Things didn't last long from there.

On the final hand, Watson put Juanda all in with the

, and Juanda called with the

and Watson had done it. He secured the victory and Juanda was left with a payday of €600,000 for second place.

Be sure to check out our Live Reporting Section to review our updates sponsored by PartyPoker. Get all the latest PokerNews updates on your social media outlets. Follow us on Twitter and like us on Facebook today!