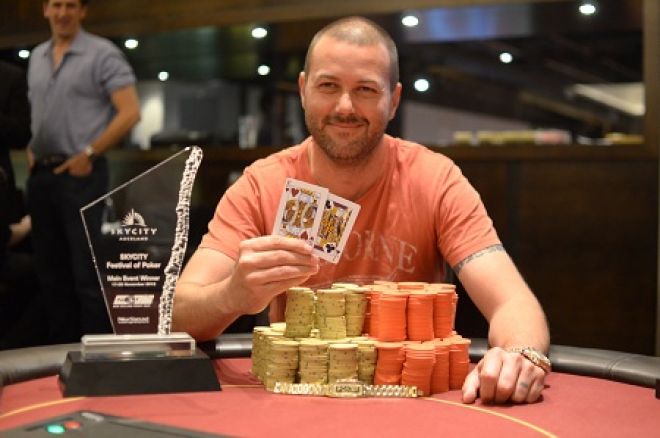 After five days of tough poker, the 2012 PokerStars.net Australia New Zealand Poker Tour Auckland Main Event has come to a close. In the end, it was New Zealand’s very own Geoff Smith who took down the trophy, all the glory and the NZ$80,502 first-place prize.

Heading into the final day, it was Jamie Mulligan who held the chip lead, but he had eight formidable foes ready to play poker. One of the players who was surely going to give Mulligan a headache was Patrick Healy. Though one of the short stacks, his recent final-table finish at the 2012 Aussie Millions meant he had the experience to accumulate chips and make a deep run. However, his day ended quickly as he was eliminated in ninth place. Healy moved all in with the

and was called by Pravin Harji’s

to send Healy to the rail.

The next two players out were the short stacks, Graeme Putt and Xiaodong Xia. They were both eliminated before the end of the very first level. Putt would commit the remainder of his chips in with the

, but was unable to improve against Monica Eastick’s

. Xia then ran his

, and the field was down to just six.

The next to fall was Miroslav Sheynin. After starting the day as one of the larger stacks, and who some thought may walk away with the title, Sheynin was involved in a very big hand that almost crippled him. The action started with Smith opening to 35,000 before Sheynin reraised to 85,000 in chips, which was called. The flop came out

, and Sheynin continued with a bet of 60,000 before Smith announced a raise, making it 140,000. Sheynin paused for a moment, then announced that he was all in for 600,000, which Smith snap-called. The cards were tabled, and Sheynin led with

. Smith was drawing dead to the flush, but had an up-and-down straight draw as well as a ten or eight to steal the win. The

fell on the turn to give Smith the lead, and when the river produced the

, the straight rocketed Smith to over a million in chips, leaving Sheynin with just 180,000. A few hands later, his

would be no match against Harji’s

Mulligan was a surprising elimination as he picked the wrong time to try and steal the big blind after losing a big pot. The table folded around to Mulligan in the small blind, and he open-shipped with the

for around 600,000 in chips. Eastick snap-called and confidently tabled her

. She flopped a set, but the turn gave Mulligan a gut-shot straight draw. The river was a blank, and the youngest player was sent to to the rail. Mulligan also began the day as the big chip leader, but could only muster a fifth-place finish.

The remaining four players went on a break, and upon arriving back, informed the staff that they agreed on a chop. Per the agreement, each would take home NZ$55,000, and they would then play for the remaining NZ$25,502 that was left over and the bracelet.

The bracelet is what Eastick really wanted to win. As the only female to make a final table in an ANZPT event this year, her hopes were short lived as she committed all her chips in a raising war on an eight-high flop. She tabled her

, but was dominated by Smith’s

. However, she wasn’t upset about being eliminated, as straight after that hand, she made her way over to cashier and asked if she was allowed to play in the deep-stack tournament.

“I really want to win a bracelet,” stated Eastick after her elimination, and she was right back into the mix to try and get that done.

, but ran into Smith’s

. This left Smith heads up with Sebastian Martineau.

Smith held a more than a three-to-one chip lead heading into the heads-up battle, and it would take just under 20 minutes for him to eliminate Martineau in second place. On the final hand, Smith check-raised all in on the

board. Martineau called to put himself at risk holding the

for a turned two pair. Smith held a second-best

paired the board on the river, it counterfeited Martineau's hand and left him felted. A gallant effort from Martineau sent him home with NZ$55,000 for his effort, and in just over three-hours of final table play, Smith was crowned the 2012 ANZPT Auckland Champion.