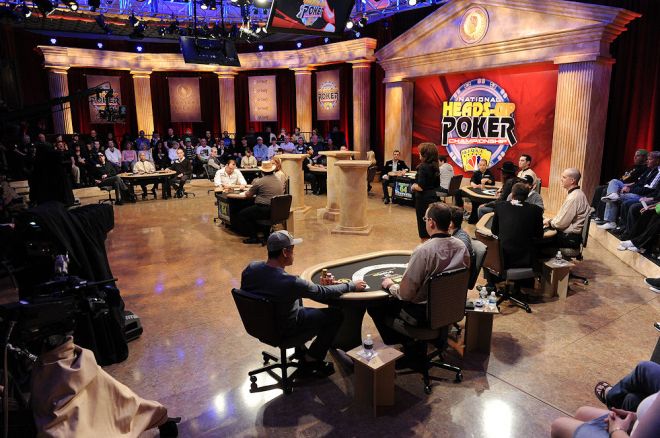 The event will be filmed at Caesars Palace Las Vegas Jan 24. through 26, with the first round on each day starting at 1:30 p.m. local time. The draw party – named “Selection Wednesday” – will be held on Jan. 23 at 9:00 p.m. at Cleopatra’s Barge in Caesaers Palace Las Vegas.

This is the eighth installment of the NBC National Heads-Up Poker Championship, but only three former champions (Hellmuth, Erik Seidel and Huck Seed) have been invited to participate. Paul Wasicka, Chris Ferguson and Annie Duke will not play. Ferguson has reached the championship match three times.

It's also important to note how the selection process works for this event, as it isn't just the best 64 players in the world.

In 2011, ESPN's Andrew Feldman wrote, "This event doesn't feature the 64 best players in the world. It is a made-for-TV event that features names and faces that the general public recognizes, some deserving players who earned their spots based on automatic entry and celebrities who enjoy the game and could potentially move the needle." Keep in mind that several players received invitations for the event, but declined. One of the big reasons many declined is timing and the fact that the NBC event clashes with the kickoff of the marquee events at the 2013 Aussie Millions.

That said, everyone is going to have questions to some of the entrants and arguments for players who they deem "snubbed" from the competition. While that's a debate for a different day, here's a look at this year's complete list:

Several players have taken to Twitter to discuss snubs, including David “Doc” Sands, who is disappointed that he wasn’t selected:

Very annoyed that I didn't get invited to play in the NBC heads up event. Absurd to me that they don't auto-invite the top 10 in the GPI

For more poker tweets, check out the PokerNews Twitter Tracker.

The PokerNews Editorial Staff will be providing you with our surprises and snubs on Saturday.