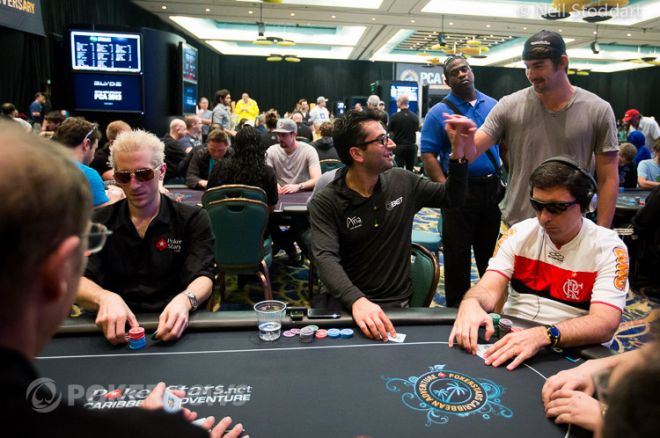 We already took a look at some of the biggest and most entertaining hands from the $100K, now we'll do the same with the Main Event and $25K High Roller.

Quads, Full House and Aces… All in the Same Hand

The early stages of a tournament can be quite boring because the blinds are low and the stacks are deep. Often, the only chance for a big hand to develop is when two or sometimes three players make big hands. That’s exactly what happened in Level 2 on Day 1b of the Main Event between 2011 WSOP November Niner Badih Bounahra, Nick Maimone and Pete Akery. The title above says it all, but here’s how it played out as posted in the PokerNews Live Reporting Blog:

2011 WSOP November Niner Badih Bounahra opened to 400 in early position, Pete Akery called in middle position, and Nick Maimone three-bet to 1,200 from the blinds. Bounahra and Akery both called. The flop fell

, and without hesitation, Maimone led out for 2,200. Bounahra and Akery both called.

The turn was the

, and Maimone tanked for 20 seconds or so. Finally, he grabbed a single blue T5,000 chip and tossed it forward. Bounahra and Akery both called.

completed the board, and Maimone slowed down, checking to Bounahra. He fired 7,600, Akery moved all in for effectively 20,000 or so, and Maimone grimaced before folding. Bounahra made the call, putting himself at risk.

for quad eights, and Bounahra shook his head, turning over

for a full house.

"I folded aces," Maimone announced after the hand.

On Day 3 of the Main Event, the money bubble loomed when 146 players remained. Just 144 were slated to get paid, so two players needed to hit the rail before the bubble would burst. Hand-for-hand play was instituted, and it looked like it could be an extended affair. Fortunately for everyone, that wasn’t the case as Robert Mizrachi managed to picked up aces and scored a double elimination.

Here’s the hand as reported in the PokerNews Live Reporting Blog:

On the third hand of hand-for-hand play, action folded to severe short stack Joao Santos in the cutoff seat. With just 11,500 in chips, he moved all in. Next to act was Robert Mizrachi, who reraised to 25,000. Vegard Froshaug was in the small blind and began to tank. After a couple of minutes of thought, Froshaug announced he was all-in — a shove worth 71,000. After a fold from the big blind, Mizrachi snapped it off.

The three players were instructed to keep their cards face down while all other tables completed action. There happened to be another all-in hand at a table on the other side of the tournament floor, but Ashley Cheung doubled up and stayed alive. After that hand wrapped up, it was time for this three-way all in to move forward.

to have a stranglehold on the hand against Froshaug's

. Things got interesting, though, as you will see from the description below.

and Santos picked up a royal flush draw. The turn was black, but it was the

and kept Mizrachi in front. With one more card to come, Mizrachi just needed to fade to knock out two players and burst the bubble.

The river completed the board with the

, making things official. Mizrachi won the pot and eliminated both opponents. With that, all 144 remaining players found themselves in the money with a round of applause in order. Let's watch the line at the payout desk grow.

The First Elimination of the $25,000 High Roller Comes 20 Minutes In

High Roller events tend to give participants a lot of play, especially in the early levels. Imagine our surprise at an elimination only 20 minutes into Level 1 on Day 1. You’d expect an aces-versus-kings situation, but that wasn’t the case.

It didn't take long for the first double of the day, which came just 20 minutes into Level 1. That's quite the feat considering players start with a 50,000 starting stack and the blinds are just 100/200 with a 25 ante. Even so, Brian Lemke and Jonathan Jaffe managed to get it all in preflop.

Now you might expect to see two big hands in a spot like that, perhaps aces versus kings, but that wasn't exactly the case. Lemke, who was all-in and at risk for 49,975, did in fact hold the

, but Jaffe held the mediocre

. We're not sure of the betting, but the fact remained the chips got in preflop.

flop gave Lemke hit a set, and the

was put out on the river for good measure, and a rather calm Lemke raked in the pot. Meanwhile, Jaffe was left with just 2,700 and was eliminated a few hands later.

Jaffe took advantage of the tournament’s one optional rebuy, but it did him little good as he busted for a second time later in the day. On the flip side, Lemke used his big stack to make it through to Day 2 on his original buy-in, but he was eliminated short of the money.

This wasn’t a big hand, but it was an interesting situation that developed on Day 1 of the $25,000 High Roller. We’ll just say it involved a game of What Does Johnny Lodden Think? between a flamboyant Frenchman, a magician and the most-decorated Olympian in history. Here’s what happened:

Michael Phelps recently paid a visit to the tournament floor of the $25,000 Super High Roller to wish his friend Antonio Esfandiari good luck. While there, the two engaged in a friendly game of "What Does Johnny Lodden Think?"

For those who don't know how the game works, someone asks an innocuous question and the participants then proceed to set lines. Eventually someone buys the line, a bet is placed, and then they ask Johnny Lodden, or whoever is nearby, for their answer. In this case, it was how much would it cost for the most-decorated Olympian of all time to wear the flamboyant pants (which featured buttons all the way up both legs) of Team PokerStars Pro Bertrand "ElkY" Grospellier, who was sitting to Esfandiari's right.

Esfandiari, Grospellier and Phelps agreed upon a $100 wager and then Esfandiari started things off with $35. No one bit on that line, so Phelps upped it to $5,000. Grospellier took it one step further and said he thought Lodden would say it'd cost $6,000 to get Phelps to wear the pants. Esfandiari bought at $6,000 and took the under, meaning he'd win $100 from both Phelps and Grospellier if Lodden's guess was under that amount but owe them each $100 if it wasn't.

They then turned their attention to the next table where Lodden was seated. He said "$1,500" with a smile.

"Are you serious?" Phelps shouted in surprise. Esfandiari then celebrated as Grospellier immediately forked over a $100 bill. "I've never played 'What Does Johnny Lodden Think?' with Johnny Lodden," Phelps laughed.

"I'd wear them for $5,000," Phelps admitted before leaving the tournament floor.

Shaun Deeb has made a name for himself online, but he's been seeking a big-time payday in the live realm for quite awhile (unless of course you count chopping the satellite to the $1-million buy-in Big One for One Drop this summer). Deeb entered the final table and was the favorite for the $1.4 million first-place prize, but luck turned on him in an unfortunate hand against Vanessa Selbst, who went on to capture the title and become the all-time female winner in tournament poker history. Deeb ultimately finished in fifth place for $289,880, his largest nonsatellite tournament score to date. Here's the heartbreaking hand:

Vanessa Selbst raised to 75,000 from the small bind with

, Shaun Deeb called in the big blind with

, and the flop fell

"I leveled myself into calling," Selbst sighed once she saw Deeb's hand.

turned, and Deeb was one card away from shipping a massive double. The dealer rapped the table one final time and delivered the river card.

Selbst looked shocked — appalled even — and immediately reached out to apologize to the fifth-place finisher. He shrugged it off, and the two walked off of the stage to talk.

Deeb once again forgave her, but we're sure he'll be thinking about this hand for a long time.

Selbst now has a massive lead with over five million chips.