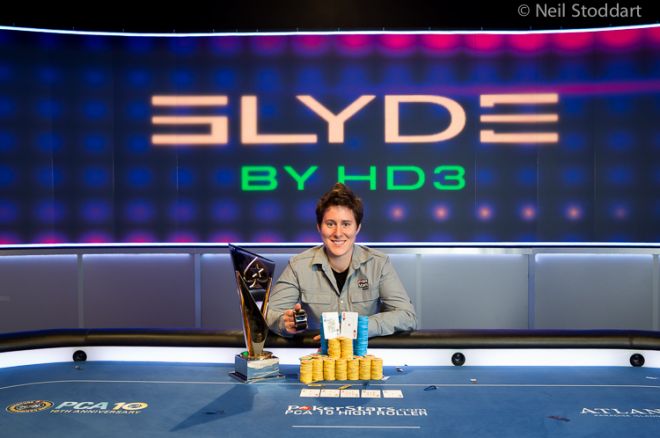 On Monday, Team PokerStars Pro Vanessa Selbst won the 2013 PokerStars Caribbean Adventure $25,000 High Roller Event, earning $1,424,420. Selbst is now the winningest female player in the history of tournament poker, besting former No. 1 Kathy Liebert by more than $1.1 million. Selbst defeated Russian Vladimir Troyanovskiy heads up – Troyanovskiy also made the final table of the $100,000 Super High Roller at the tenth anniversary of the PCA.

The final table started fast, and within 12 hands, three players were eliminated. Micah Raskin was the first player to bow out when he three-bet jammed over an open from Ole Schemion. With the blinds at 12,000/24,000/3,000, Schemion opened to 48,000 from under the gun with

. The action folded back to Schemion, who called.

Raskin made a pair of jacks when the flop fell

, but the turn and river bricked

respectively, and the American was eliminated in eighth place.

On Hand #10, Schemion claimed another victim – this time it was fellow countryman Tobias Reinkemeier. Schemion opened to 48,000 from early position with

, and the action folded back to Schemion, who moved all in for effectively 638,000. Reinkemeier called.

The eights held as the flop, turn, and river came

Two hands later, Schemion knocked out out a third player from the official final table. The German opened to 48,000 from under the gun with

from the cutoff seat, and the action folded back to Schemion, who snap-called.

It was all but over when the flop fell

, giving Schemion a full house, and Kenney’s tournament was over when the

completed the board, and Kenney was off to collect sixth-place money.

Schemion’s hot start stalled shortly after he knocked out Kenney when he unsuccessfully tried to bluff Selbst. With the blinds still at 12,000/24,000/3,000, Selbst opened to 50,000 from early position with

. Schemion defended from the big blind with

, and the dealer fanned

. Both players checked. The turn was the

Suddenly, the Team PokerStars Pro had the chip lead, while Schemion plummeted to the bottom of the counts.

, and Schemion responded with a four-bet to 266,000. Selbst called. The flop fell

, Schemion checked a second time, and Selbst moved all in for effectively 765,000. Schemion quickly folded.

Despite plummeting down the counts, Schemion wasn’t the next player to bust – it was Shaun Deeb. Deeb, who entered the final table with the chip lead, played a massive blind vs. blind pot against Selbst when the Team PokerStars Pro hit a very fortuitous river card. With the blinds remaining the same, Selbst raised to 75,000 from the small blind with

. Deeb defended from the big blind with

, and the flop was

on the turn was a brick, but the

spiked on the river, eliminating Deeb in fifth place. Despite taking a massive chip lead, Selbst was very apologetic towards Deeb, who shrugged it off and later joined the James Hartigan and Joe Stapleton in the broadcast booth.

, and Watson led out for 100,000, thinking he was putting Schemion all in. Schemion called, leaving just a few thousand behind, and the turn was the

. Finally, the money went in. The German needed a five to stay alive, but the

completed the board, and he was eliminated.

Three-handed play lasted only 45 minutes or so, when Selbst trapped Watson. The Canadian opened to 80,000 on the button with

, and Watson made the call. The dealer fanned

, giving Selbst a pair of queens to go along with her flush draw, and she checked. Watson saw this as an opportunity to bet, and fired 320,000. Selbst called. The river was the

, giving Selbst her flush, and she checked once again. Watson tanked before moving all in, and Selbst snapped it off.

Watson was eliminated in third place, earning $462,320, and heads-up play began with Selbst commanding a more than 3-to-1 chip lead.

Selbst took the first two pots against Troyanovskiy, but there was no quit from the Russian. After making a key fold with two pair, he doubled to over 30 big blinds with

of Selbst. He then doubled again with

. Selbst had a pair and a flush draw with

bricked on the river, and Troyanovskiy was back up over 50 big blinds.

Selbst's rail cheered for an ace, but the

The final table area became quiet as the

turned, and Selbst, who had stood up to sweat the hand, sat back down to start cutting out chips.

She shot back up out of her chair when the

spiked on the river, however, as she realized she was the winner of the $25,000 High Roller.

"I'll take it," she said with a shocked look on her face. "I'd rather be lucky than good."

Congratulations to Selbst for earning the second-largest score of her career and becoming the winningest female player in tournament poker history. Join us in February as we travel to France for the next stop of the European Poker Tour; EPT Deauville.

For now, goodbye from the Bahamas, and thanks for joining us throughout the 2013 PCA!