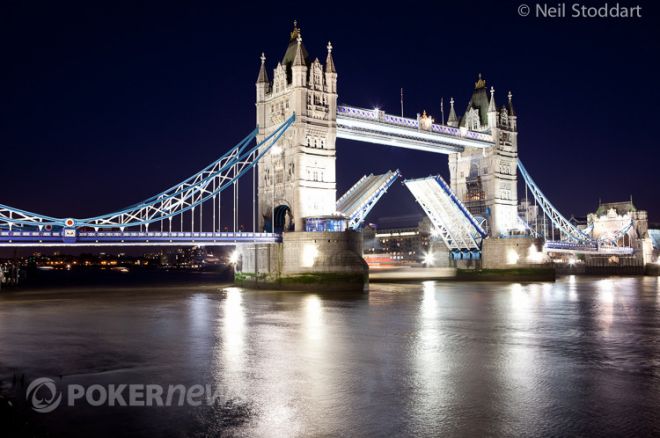 The eagerly-awaited PokerStars.com European Poker Tour London kicked off Sunday at the Grosvenor Victoria Casino, better known as The Vic. A hardy bunch of 236 players posted the £5,000+250 buy-in on the first of two Day 1 flights, and only 131 made it through to Day 2.

It took eight 75-minute levels of play to whittle down to that number, and at the end of the day Canadian poker pro Marc-Andre Ladouceur finished on top with 163,500. Players from the Québéc region of Canada have been dominating the EPT this season, whether it’s at the table or a nearby bar. Ladouceur had already won more than €300,000 in Season 9 and stormed his way through Day 1a. He was a raising machine that caused his tablemates all kinds of trouble.

Someone had to stand up to Ladouceur and that person was Marvin Rettenmaier. To be fair, when Rettenmaier called all-in after a Ladouceur river over-bet he did have a set, but that was no match for Ladouceur who had turned a flush. That put the Canadian up to 170,000 (100,000 more than second placed player at the time) and from there he steadied his ship.

Another player who thrived on Day 1a was EPT Vilamoura Season 6 winner Antonio Matias who finished with 141,000 in chips. Some of those chips came courtesy of Team PokerStars Pro Tono Judet. The man from Portugal was betting into Judet with a flush draw and got there on the river, at which point Judet called all-in, saw his opponent’s hand, mucked, and left the room.

EPT London has seen luminaries such as Team PokerStars Pro Vicky Coren, Benny Spindler, Michael Martin and Aaron Gustavson claim this coveted title in the past. The latter was the only former champion playing Sunday and he didn’t last long. Gustavson got his stack in on the turn when he had the nut straight only for the board to pair up for a player holding a set.

Coren was too busy cashing in the UKIPT High Roller to play the EPT Main Event on Sunday, but the ladies were very well represented as Team PokerStars Pros Vanessa Selbst (54,800), Liv Boeree (56,100), and Leo Margets (57,000) all advanced, as did Annette Obrestad (84,100). Selbst seemed to be in every pot for a while and her stack fluctuated a lot but never to a critical point. Boeree felt like she was back on form, and Margets was stuck in the corner all day but managed to advance. Obrestad, meanwhile, eliminated veterans such as Barny Boatman and Steve Jelinek to cruise through to Day 2.

Day 1b got under way at 12:00 PM GMT and eight more 75-minute levels will be played before all remaining players join forces for Day 2 on Wednesday. Be sure to follow the PokerNews Live Reporting page for up-to-the-minute reports, photos, chip counts, and more!