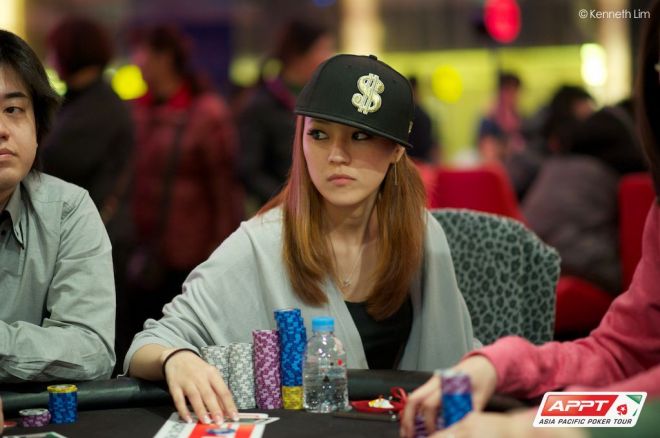 On Thursday, the first starting flight of the 2013 PokerStars.net Asia Pacific Poker Tour Seoul Main Event kicked off at the Paradise Walkerhill Casino. Day 1a saw a total of 122 players hit the felt for the first main event of the APPT Season 7 schedule. By the end of eight levels only 50 players remained with Benjamin Richardson (111,600) leading the pack. Right on Richardson's heels was Manami Hayamizu (104,800) who sat near the top of the leaderboard for the majority of the day.

Xuan Liu will also be returning for Day 2. Liu found much success early in the day, but that all came crashing down before the last break. On the last hand of Level 6, Liu was involved in a hand that saw her seven-bet shove all in holding pocket queens. While Liu's ladies were strong, they were nothing against the pocket kings and pocket aces of her opponents. After that hit Liu was able to nurse her short stack back to life during the last two levels of the day and will be returning for Day 2 with 53,500 in chips.

Joseph Cheong made the trip to Seoul and was eager to participate in this event but was eliminated before play ended for the day. Cheong took a substantial hit early when his

was cracked by an opponent's

. Eventally, he was all in before the flop holding

but was forced to the rail when the board ran out

Team PokerStars Pro Bryan Huang also sat down at the tables only to come up short by the day's conclusion. Huang saw his final hand against two other opponents on a board of

. Huang fired a bet of 2,250 and one of his opponents called to see the

strike the turn. Huang moved all in for about 13,000. His opponent announced a call.

Huang needed to either make a flush or pair his jack on the river to stay alive. Unfortunately for Huang, the

completed the board and he made an early exit on Day 1a.

Play will resume at the Paradise Walkerhill Casino on Friday when a new batch of players will take their seats for the second starting flight. Be sure to stay tuned to PokerNews as we provide you with all of the latest updates from the tournament floor.