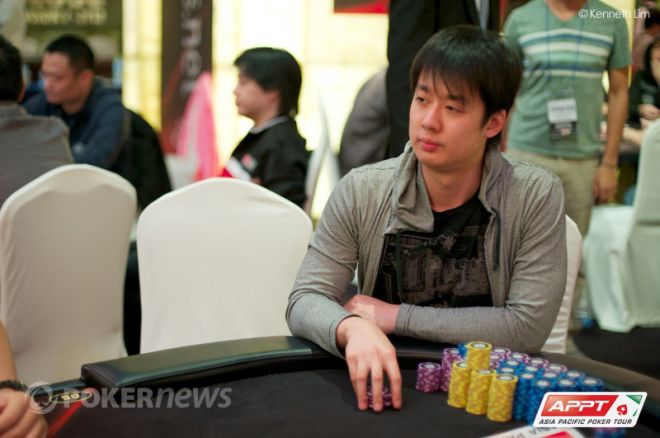 Day 2 of the PokerStars.net Asia Pacific Poker Tour Seoul Main Event came to a close on Saturday, and 21 players have advanced to Day 3. After the field moved through another eight levels of play and popped the money bubble, Aaron Lim emerged as the man to beat with a field-leading 741,000 in chips.

Lim began his domination early on in the day during a big confrontation with Hoi Tung Ip. The flop read

for top-top. A dejected Ip shook his head and showed the

for a pair of tens with a smaller kicker. The

rivered, ensuring that Lim would score the knockout and absorb Ip's stack. From there, the sky was the limit for Lim as he continued to command the field.

PokerStars Team Online member and Japan's first World Series of Poker bracelet winner Naoya Kihara finished the day with the third biggest stack in the room. When the field reached the final four tables, Kihara found himself scooping in massive chips after a straight draw came through. Kihara and Wang Ping Yuan took a flop of

together, and Kihara checked to his opponent. Yuan shot out 15,000 only to have Kihara check-raise to 35,000 total. Yuan wasted little time three-betting all in for his tournament life, and Kihara snapped him off, having Yuan covered by only a few thousand in chips.

Yuan clapped when he saw that his middle set was the best hand at the moment. That jubilation, however, was short lived as the dealer produced the

on the turn, giving Kihara a straight. Yuan failed to fill up when the

finished off the board, and Kihara was able to send Yuan packing. This pot gave Kihara the boost he needed to run over his table in the last two levels of play, and he finished the day with 528,000 in chips.

While all of those players will return to the felt to continue their quest for the KRW 163,400,000, several others faltered on their attempt to reach the final day. Aaron Peter Manley, Raiden Kan, Andrew Moreno, Foster Hays, Hong Yang Bian and Ben Richardson are just a small sample of those who were eliminated without pay.

On his final hand that occurred during Level 12 with the blinds at 1,000/2,000/300, Moreno opened with a raise from middle position and was called by Kevin Petersen in the small blind and Ted Wang in the big blind. The flop fell

, and action checked to Moreno. He fired 5,000, both players called, and the turn produced the

. After Petersen checked, Wang bet 6,000. Moreno raised all in for roughly 33,000, and Petersen folded. Wang made the call and rolled over the

. He had Moreno covered, who held the

completed the board on the river, and Moreno was eliminated.

The bubble lasted for quite some time as eight players were able to double up before an elimination occurred. Finally, the bubble burst during a confrontation between chip leader Lim and Ryan Kim. Lim opened to 10,000 from the cutoff in Level 16 with the blinds at 2,500/5,000/500, and Kim called to see a flop of

. Kim checked for a second time, and Lim shot out 17,000. Kim stayed the course, and the dealer produced a second pair on the river with the

. Kim checked once more, and Lim moved out a stack of 100,000 that was more than enough to put Kim all in. Kim pondered for a bit before calling off his last 64,500. He tabled the

for for sixes and deuces with an ace kicker. Lim, however, rolled over

for sixes and treys, which was ultimately the best hand.

Play will conclude on Sunday when the final 21 players will return to the Paradise Walkerhill Casino and play down to a champion. Be sue to stay tuned right here on PokerNews while our Live Reporting Team brings you all of the live coverage from the tournament floor.