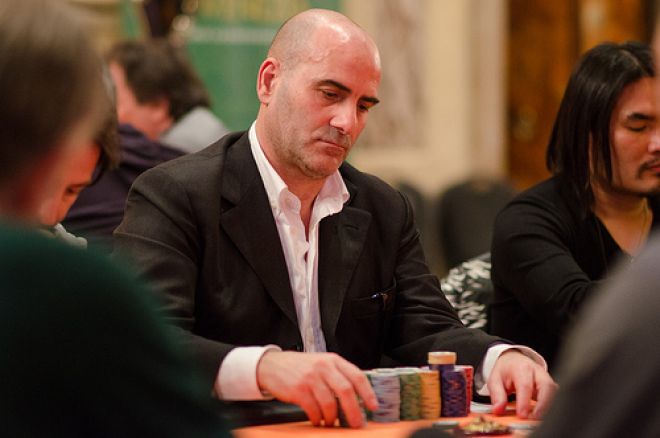 Season XI of the World Poker Tour continued on Tuesday with Day 1b of the WPT Venice Grand Prix. A total of 108 players registered for the second flight, bringing the total number of players to 173, and only 91 will return for Day 2. Leading the entire field is Day 1a chip leader Stephen Behm, and in second place is Day 1b chip leader Fernando Cimaglia.

Darcourt found himself all in preflop holding two kings, only to be crushed by Demjan's pocket aces. The aces held, and Darcourt was off to traverse the canals of beautiful Venice, Italy.

, giving Mossali a miraculous set of kings and the lead in the hand, and it was all over for Hall when the turn and river came

Staszko, the 2011 World Series of Poker Main Event runner up, was the recipient of a massive triple up during Level 5. He, Jurgen Paulisch, and Bledar Pajana saw a flop of

En route to bagging the most chips on Day 1b, Cimaglia won a massive pot off of Giuseppe Cristaudo. The two were heads up on a board of

. Cristaudo fired 6,300, and Cimaglia called. The river was the

for tens and fours, which Cimaglia had crushed with

The story of the day took place off of the felt however, when Phil Hellmuth made a grandiose entrance via one of the historic gondolas in Venice. Hellmuth, who was dressed in festive Carnevale di Venezia garb, floated to the back dock of the famed Casino di Venezia, and strolled his way into the poker room.

Unfortunately for Hellmuth, his performance on the felt wasn't as memorable. With the blinds at 300/600/75, Hellmuth opened to 1,700 in middle position. Cristaudo called on the button, and Cimaglia defended from the big blind. The flop was

, and Cimaglia checked to Hellmuth who fired 4,000. Only Cimaglia called. The turn was the

, Cimaglia checked again, and Hellmuth tossed out 8,000. Cimaglia tanked for quite some time before check-raising all in for effectively 34,000. Hellmuth thought for a bit, then called.

completed the board, and Hellmuth was off to take a few more gondola rides.

Day 2 of WPT Venice will begin on Wednesday at 14:30 CET. Be sure to check back in at PokerNews.com for a recap of the day's events.