Bust Out the Brooms: Team PokerStars Sweeps The Professionals 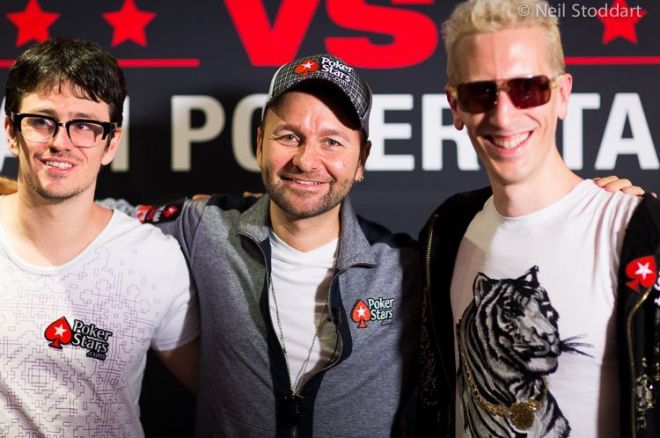 What started as a tweet, ended in a sweep at EPT London, as Team PokerStars prevailed over The Professionals three to nil on Sunday. Gus Hansen, Tom Dwan, and Viktor Blom will have to pay Daniel Negreanu, Isaac Haxton, and Bertrand "ElkY" Grospellier $50,000 respectively, and all three members of Team PokerStars will receive $10,000 in tournament buy-ins from Full Tilt Poker.

The day began with a match between Grospellier and Blom. Neither player had much to say during the battleship-style showdown, and Blom was eventually swept by Grospellier. Grospellier got out to a quick lead when Blom moved all in on Table 1 with

on a flop of

. Grospellier flopped the second-nuts with

, and held as the turn and river bricked

Over on Tables 2 and 3, Grospellier finished the job. On Table 2, all of the chips went in the middle on a flop of

. Grospellier had Blom dominated with

, and Blom didn't connect with either the turn (

). The match was already over, but the Frenchman secured the sweep when he shoved with

. Blom called with the best hand —

spiked on the river, giving Blom the nut flush.

Isaac Haxton jumped out to a quick lead against Tom "durrrr" Dwan in the second match, winning Table 1. On the 23rd and final hand, Haxton min-raised on the button to 60. Dwan called, leaving 522 behind, and the flop was

. Dwan checked, Haxton fired 40, and Dwan check-raised to 145. Haxton called, and the turn brought the

completed the board, and Dwan checked a third and final time. Haxton moved all in for effectively 278, and Dwan called. Haxton showed

for trip fours, and Dwan mucked his hand.

Dwan evened the match, winning Table 3, and little did we know that it would be the one and only table The Professionals would win all day. Haxton was all in and at risk for his last 396 preflop, Tom "durrrr" Dwan called, and the cards were tabled.

flop gave Dwan a leading pair of sevens, and he held as the turn and river came

But Dwan could not win the rubber match, and Team PokerStars officially clinched victory when Haxton took down Table 2. On the 63rd and final hand played on that table, Haxton raised to 100 on the button with the blinds at 25/50. Dwan three-bet jammed for 1,176, and Haxton immediately called.

Haxton had Dwan crushed, and his aces held up when the board rolled out

. With the win, Haxton earned $50,000 from Dwan, and each member of Team PokerStars earned $10,000 in tournament buy-ins from Full Tilt Poker.

Even though Team PokerStars was freerolling, Hansen and Negreanu still battled for their own $50,000 bet. On the seventh hand on Table 2, Negreanu took a 1-0 lead over Hansen. Most of the heavy lifting was done on Hand #6, when Negreanu min-raised to 40 on the button. Hansen called, and the flop brought

bricked off on the river, and Hansen was left with just 40 chips. He busted on the very next hand.

Hansen took a very large lead on Table 1, but Negreanu doubled up twice. Negreanu then won the table in a cooler situation. Negreanu min-raised to 100 on the button with the blinds at 25/50, Hansen three-bet to 300, Negreanu four-bet to 600, and Hansen five-bet to 1,250. Negreanu moved all in for effectively 2,010, and Hansen snap-called.

Negreanu indeed held as the board rolled out

, and the match essentially was over. PokerStars swept Full Tilt Poker three to nil, while Negreanu himself was still looking for a sweep of his own by winning Table 3.

"He stuck it right in my..." Hansen stated. "I probably shouldn't say that."

Negreanu secured the sweep on Table 3 a short while later. On the 81st and final hand, Negreanu min-raised to 100 on the button. Hansen three-bet to 300 in the big blind, Negreanu moved all in for effectively 1,295, and Hansen called.

The ace-king held as the flop, turn, and river came

, and it was all over. The two shook hands, then the trio that represented Team PokerStars posed for pictures.

Congratulations to PokerStars and their representatives for winning this inaugural, battleship-style match up. We don't know if there will be any more of these in the future, but The Professionals are already awaiting a rematch: