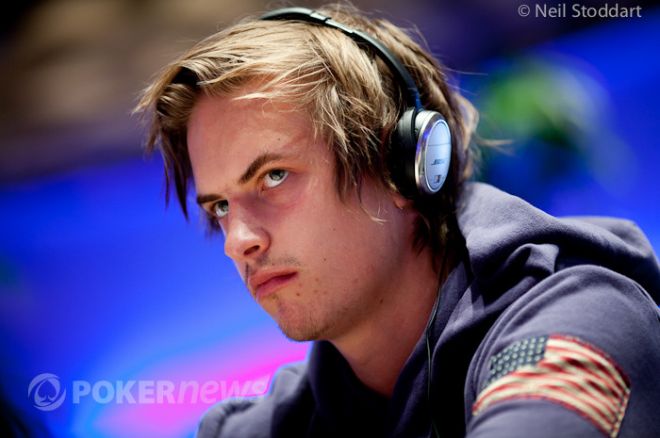 Viktor "Isildur1" Blom is no stranger to the colossal swings of high-stakes cash games. In 2009, the Swedish phenom began his rise to fame by facing off against the likes of Tom Dwan, Phil Ivey and Patrik Antonius, among others, and won millions in his first few months on the site. He subsequently lost all the money back — the majority of it in a bloodbath heads-up session against Brian Hastings.

Blom has endured similar swings early in 2013. After opening the year by winning more than $4 million in the first week of January, Blom has lost all but a million of it back. This time, Blom has gone away from his bread-and-butter no-limit hold'em and pot-limit Omaha games to challenge some of the top mixed games players who have honed their craft for years. The games are mostly new to Blom, who has rightly earned his reputation as one of the most fearless players in the game today.

Next week, Blom will take part in a heads-up challenge against Bertrand "ElkY" Grospellier and Team PokerStars as part of European Poker Tour London Poker Festival. Before making his way to the Grosvenor Victoria Casino this week, Blom sat down with PokerNews to discuss the high-stakes action at Full Tilt Poker, transitioning to mixed games and more.

You made a name for yourself playing the high-stakes games at Full Tilt Poker a few years back. How does it feel to represent the site where "Isildur1" truly became a poker superstar?

Full Tilt Poker has always had the biggest high-stakes games, so it just feels normal and natural for me to play there and be a pro there. It feels right, like I should be there playing more than any other site.

No. The timing of the end of my deal came right at the time of Full Tilt being bought by Stars. FTP was where I made my name, so I think it just fell into place that I came here when my contract was over. I need to be on the side with all the high-stakes action is, so that helped.

Did you always want to be a sponsored pro at FTP?

I made a lot of money early in poker, so of course freedom sounds better to a poker player. I also didn’t want to go looking for any attention; I just liked to play. But now I get that it’s not bad to get a few live event buy-ins and get to travel the world while I play, too. If I had a choice of sites, I’ve always chosen Tilt.

At this time last year you were known primarily as a no-limit hold'em and pot-limit Omaha player. Lately, you've playing more mixed games and 2-7 triple draw. Why the switch?

No one will give me enough action at the other games, so I have to learn new ones. If games at no-limit hold'em were better, and there were more good games, I would still play them any day.

Last year you had just started learning mixed games before taking 14th place in the $50,000 Poker Players Championship event at the WSOP. Have you been studying and improving simply by playing those games or do you have someone teaching you along the way?

When I played the Poker Players Championship, I didn’t know all the games. Daniel Negreanu gave me a quick lesson, and I tried to go after a cash. I was very happy cashing in that event, and I ended up hitting a one-outer in the pot for the chip lead during the tournament, so anyone would be happy then right?

How do you feel you match up with some of the top mixed games and 2-7 triple draw players? Do you already consider yourself one of the best at the highest stakes?

I enjoy the game and I'm still learning. I don't see myself as a top player yet, but I believe I will be some day... hopefully sooner than later.

The game is a lot of fun, even though right now it is very expensive.

Talk about the first few weeks of 2013. You decided to skip the PCA — and not to defend your Super High Roller title — in order to play online, and ended up making around $5 million before the end of January. Describe what it's like to win that amount of money in such a short time.

It was a great rush for me, it always is. But I ended up losing most of it back, so I will have to try to do better next time.

You've run into a bit of a downswing lately. How do you pick yourself up from a bad run?

I usually go out and drink in town with friends and try to forget poker exists for a night, and then try again tomorrow once I am feeling better from the night before.

At EPT London, you are going to compete against Bertrand "ElkY" Grospellier during “The Professionals” vs. Team PokerStars matchup. Gus Hansen decided to pit you against "ElkY" instead of Ike Haxton. We know you have a history with Ike, but who would you rather face off against?

Ah, this is a really tough one for me. Ike is tough as hell. I would say "ElkY," but I’m not sure. I think playing with "ElkY" could be a lot of fun, even though I have no idea how he plays. That helps make it more fun, but this is still a tough one to answer.

Can we expect to see you at the World Series of Poker this summer? If so, what events do you plan on playing?

Yep, I think I’ll go. I haven’t decided for how long yet, and to me it’s too bad it’s right in the summer because that is when all the fun happens in Sweden.