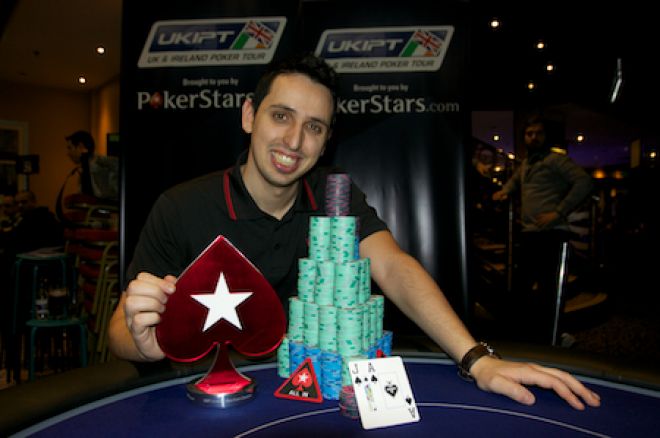 Having won the World Poker Tour National Series in Barcelona last October, Aido had some experience in pursuing the top prize at a final table. Aido started the final table sixth in chips, but he used his skill and know-how to spring himself to his first UKIPT title.

A short while later, Aido was in another large pot to double his stack after his

, leaving the Irishman severely short stacked. Dowling got the last of his chips in from under-the-gun with

to eliminate Dowling in eighth. In the very next hand, Simcoe busted Cesar Garcia when his

and collected Ney’s chips after the cards fell

With the blinds at 50,000/100,000/10,000, Philippe Souki was the shortest stack among the final four players. He attempted to gain some momentum after he three-bet shoved his remaining stack with

and was called by Thomas Ward who flipped over

With three players left fending for the title, the aggression intensified when Simcoe attempted a creative play post-flop. Simcoe raised on the button with

and Aido called from the big blind with

to see a flop of

. Aido checked and Simcoe pushed his chips to the middle, which resulted in a call from Aido. The turn

river brought no help to Simcoe and he busted in third place.

Aido held a nearly 2-to-1 chip lead over Ward going into heads-up play. A major moment came when Ward put in a five-bet preflop with

to put the Spaniard all-in. Aido called with

and won the massive pot with only ace-high. Ward was all-in on the very next hand and fell short for a second straight time. Aido five-bet with

and Ward called with

, putting his tournament life at risk. The

was dealt on the river.

After a deal was made before heads-up action began, Aido was awarded a grand prize of £144,555, while Ward collected £116,845 for second place. Aido was also awarded the opportunity to compete in the UKIPT Champions of Champions tournament, which started early on Monday, for a chance to win a package to next season’s UKIPT Main Events.

Photo and data courtesy of the PokerStars Blog