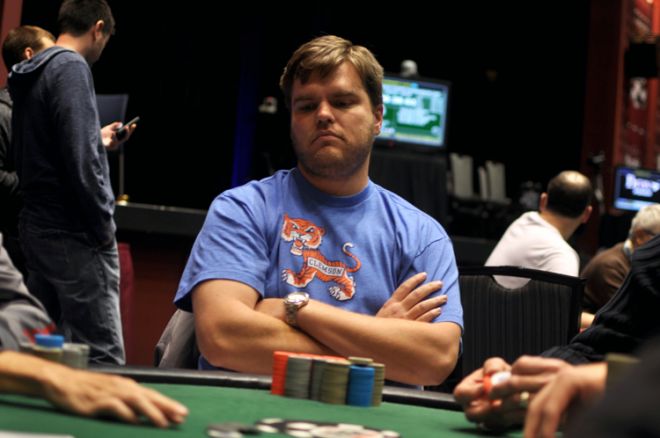 The 2012-13 World Series of Poker Circuit continued on Sunday with Day 2 of the Harrah’s Cherokee Main Event. Of the 201 players that started the day only 11 remain, and the chip leader is Hugh Henderson with 4.235 million. Henderson was the only player to bag over 2.4 million chips, and will enter the third and final day with nearly a quarter of the chips in play.

Day 2 began with Rick Hensley as the chip leader. Hensley, who started the day with a little over 400,000 in chips, then knocked out an opponent and peaked at 460,000. It was all down hill from there for the Morganton, North Carolina native. He lost a 345,000-chip pot against Larry Gurney when he moved all in on the flop with a gut-shot straight draw. Gurney called with aces, and held.

Hensley then proceeded to lose another big pot with ace-jack against Fernando Tobal’s aces, and then was eliminated by Keith Fox. Hensley moved all in with second pair on a queen-high board, and Fox called with ace-queen. The turn and river both bricked, and Hensley was eliminated before the first break of the day.

Other players who suffered quick eliminations were Chris Bell, Tripp Kirk, and Ken “Teach” Aldridge. Aldridge lost the majority of his chips with two pair against an opponent’s flush draw. The player made his flush, and Aldridge busted shortly thereafter.

The bubble burst in Level 19 when Sean Walton four-bet shoved with two kings. Carter Myers looked him up with ace-king, and the

poked its way through the window of the flop. The turn was a brick, the river was a third ace, and Walton was eliminated just shy of the money.

Once the bubble burst, there was a flurry of eliminations. Among the players who cashed but were unable to survive the day were Claudia Crawford, James Menard, five-time ring winner Kyle Cartwright, Jerry Barlow, Jeff Williams, and Benjamin Armstrong. Williams lost a race with ace-jack against Myers’ pocket nines.

When the field was reduced to just two tables, the pots began to grow exponentially. John Bowman won one massive pot off of Jonathan Moseley, when he flatted a raise preflop with pocket queens. The flop brought another queen and two eights, giving Bowman a full house, and he just called Moseley’s bets on the flop and turn. On the river, Moseley fired a third bullet and Bowman put in a large raise. Moseley made the call, then mucked when he saw Bowman’s monster.

Moseley got those chips back and more a few hands later when he rivered a full house against Jeremiah Fitzpatrick and won a 2.8 million-chip pot. Fitzpatrick called a one million-chip shove on the river with trip deuces, which crippled him down to 430,000 chips.

All eyes will be on Henderson on Monday however, as he leads the way with over four million chips. In the second-to-last elimination of the evening, he rivered the nut straight against Milan Dragic. Henderson open-shoved for a pot-sized bet, and Dragic called with a set of eights. They were no good however, and he was off to the cage to collect $15,601 for his 13th-place finish.

Fitzpatrick followed him to the rail in 12th, losing a blind-for-blind hand against his nemesis, Moseley. Fitzpatrick jammed from the small blind with a weak ace, Moseley called with a pair of sevens, and the pair held.

Play will resume at noon local time on Monday, with the two tables looking like this:

Be sure to check back with the PokerNews Live Reporting team, as we bring you up-to-the-minute updates straight from the tournament floor.