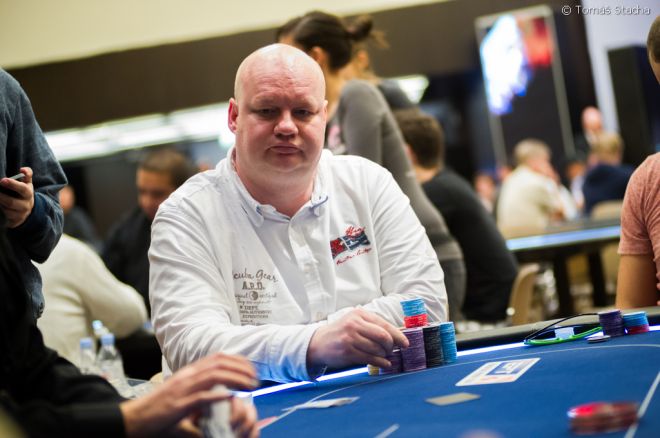 The European Poker Tour Berlin €10,000 High Roller event kicked off Thursday with just 22 players, but as the day went on, that number grew and grew until a staggering 136 entries were created. Registration will remain open until Day 2 kicks off Friday at noon. It's the Main Event all over again, as Day 1b chip leader Ronny Voth was the overnight chip leader when play ended. This time, he closed off with 607,500 in chips followed by AP Phahurat and his 498,500. Just 45 players remain, all gunning for a spot in one of the biggest ever EPT €10,000 events.

Andreas Eiler was the first player to bust out after just two hours of play. Eiler ended up all in versus Andreas Goeller on the turn and he witnessed his set get beat by Goeller's rivered straight.

At the same time that Eiler lost his first bullet, it was Griffin Benger who was extremely cheerful with his good start. Benger had a steady day and finished on 382,200.

Aaron Lim was gifted a lot of chips and the World Series of Poker Asia-Pacific bracelet winner never looked back. Lim closed out on 173,400 in chips and is one of the players to look for on Day 2.

Martin Kabrhel also made it to the second day, but not without doing a rebuy. The hyper-agressive Czech pro ran a ton of bluffs and was caught by Bruno Lopes. After losing that big pot with king-seven to queens, Kabrhel dwindled down and re-bought. After firing his second bullet, Kabrhel ended the day on 112,600.

Plenty of players re-bought today, here's a list of all the players that put up a total of €20,000 to stay in this event. Remember, it's still possible to buy in tomorrow morning before play starts.

Players like Justin Bonomo, Johannes Strassmann, Andrew Chen, Faraz Jaka and Taylor Paur busted both their bullets on Day 1. Top German pros Tobias Reinkemeier and Philipp Gruissem are set to enter the event tomorrow as they only dropped by in the tournament room to catch up with some of their friends.

Team PokerStars Pro Max Lykov was off to a great start, and he kept building his stack all throughout the day. Scott Seiver had a rocky start, but he got back up and his stack sky-rocketed in the following hours. Online cash game superstar Daniel "jungleman12" Cates also made an appearance, and he fought out some battles with table mate Mike McDonald. Cates had an okay first day and will return for Day 2 with 65,900.

The final two levels belonged to our overnight chip leader Voth. The German had another great starting day. Voth jumped up to the top after winning three massive pots within a 45-minute span. First, he crippled Ognjen Sekularac, than he busted a player, and ultimately he busted Sorel Mizzi on a quarter-million chip coin flip. Other players that survived the day are Team Pros Jake Cody and Jan Heitmann, and established pros Chris Brammer, EPT London winner Benny Spindler, EPT Berlin winner Davidi Kitai and the 2012 GPI Player of the Year Marvin Rettenmaier.

Play resumes Friday at 12 noon when play will wind down to a final table. Make sure to tune back in to PokerNews.com as we bring you all the live updates from start to finish.