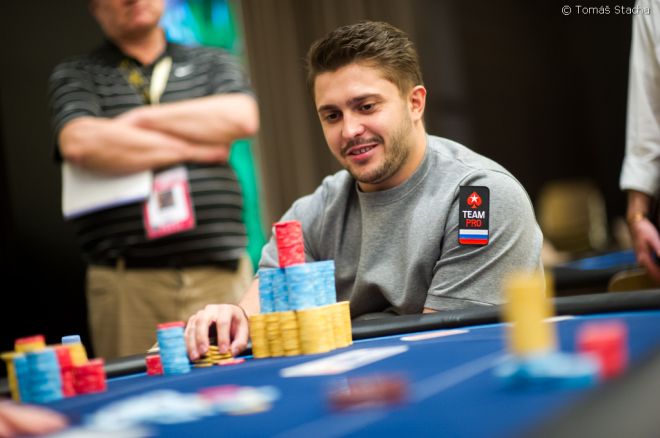 On Friday, the second day of play of the Season 9 European Poker Tour Berlin High Roller event wrapped up. Forty-five hopefuls returned to the felt with hopes of winning one of the most prestigious events at this stop. Play occurred all of the way down to a final table of eight and continued down to the final seven before concluding for the evening. Leading the final seven and representing the red spade is Team Pro Max Lykov with a stack of 1.683 million.

Right on Lykov's heels is the incomparable Martin Kabrhel who is just 40,000 shy of Lykov with 1.643 million. Rounding out the top three is Griffin Benger who will bring 1.128 million back for Day 3.

The field was littered with big-name professional players all seeking the coveted trophy as well as the €429,000 first-place prize. That being said, some fell more quickly than others. Names like Jan Heitmann, Bryn Kenney, Daniel Cates, and Marvin Rettenmaier all fell within the first level of the day. Mike McDonald was also eliminated by Aaron Lim in a relatively brutal fashion. Lim, who recently took down the 2013 APPT Seoul Main Event as well as his first bracelet at the WSOP Asia-Pacific during Event #4, a $5,000 No-Limit Hold'em Six Max is running hot as of late and it showed when he and McDonald took a flop of

together. Lim check-raised McDonald all in and McDonald snapped off with

. Lim was behind with his

but managed to prevail when he spiked a queen immediately on the turn.

While those players fell in the first level, others continued to drop quickly as the day progressed. Scott Seiver eliminated Ankush Mandavia when his ace-queen held against Mandavia's ace-ten. Not too much later in the day there were a flurry of eliminations that saw the exit of professionals Paul Volpe, Jake Cody, and Dominik Nitsche. Others to bust as the money bubble approached were Fabian Quoss, Paul Berende, Jussi Nevanlinna, and Marc-Andre Ladouceur.

With seventeen players left, the money bubble finally approached. A short-stacked Chris Brammer found a bit of hope when he was able to score a double up through Lim. However, just a few hands later Lim was able to exact revenge and pop the bubble through Brammer's elimination. At 3,000/6,000/1,000, Brammer opened to 19,000 from the cutoff. The Aussie cut out a three-bet to 49,000 out of the big blind and Brammer moved all in over the top for around 200,000. Lim instantly called and the hands were rolled over on the felt.

Brammer was in great shape, and the

board missed Lim completely. The

on the turn looked like a bad card for Lim, but it actually gave him an extra out to make the best hand. That's exactly what happened, as the

struck the felt and suddenly Brammer was the bubble boy.

Everyone from here on out was guaranteed at least €22,000 and that's exactly what Georgios Karakousis and David Peters received. Also finishing in the money were Gautam Sabharwal, Artem Litvinov (€24,700), Igor Kurganov, AP Phahurat (€27,500), and Day 2 chip leader Ronny Voth (€30,300).

Voth's elimination set in motion the unofficial final table of nine. The final table bubble was burst quickly, however, when Kabrhel and Jan-Peter Jachtmann played a 1.4 million-chip pot before the flop. Jachtmann opened from early position to 37,000 and action trickled around to Kabrhel on the button. He made it 101,000 to go and it folded back to Jachtmann. He double fisted all of his chips into the middle of the table for a bet totaling over 700,000. Kabrhel snapped him off.

The board fell down

and just like that the official final table was set. The players decided to keep playing rather than stopping at the final table and so the cards continued to fly for two more levels. During that time the final table saw its first casualty in the form of PCA $100,000 Super High Roller champion Scott Seiver. Seiver was very active at the final table but finally saw his demise when he opened a pot with a min-raise at 10,000/20,000/3,000. It folded around to Lykov who made it 92,000 to go. Action came back to Seiver who moved the rest of his stack all in. Lykov quickly tabled his cards and announced a call.

and was crushed by Lykov's

. Seiver found gin on the flop, however, as he paired up when

was spread across the felt. Suddenly Lykov was looking for a king or a spade to send the online legend packing. The

on the turn was meaningless but the

on the river sealed Seiver's fate.

The final seven will return to the felt on Saturday at 13:00 CET to engage in battle one last time. Be sure to stay tuned to PokerNews as the Live Reporting Team remains on hand for the exciting conclusion of this massive high roller event.