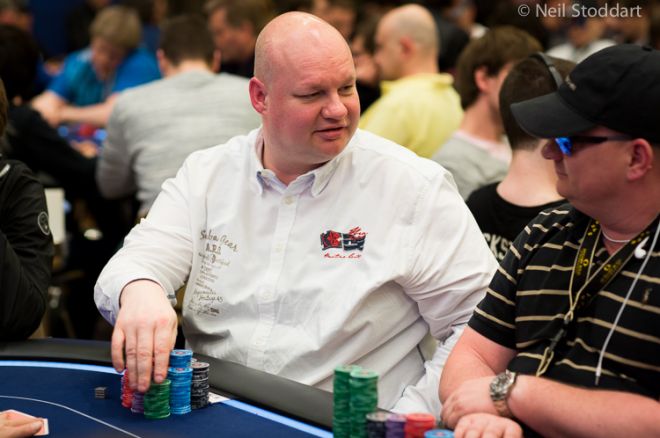 On Sunday, the first of two starting flights for the Season 9 European Poker Tour Berlin Main Event took place. A grand total of 347 runners came out to participate, and after eight levels of action on the felt roughly 179 remained. German liv satellite qualifier Ronny Voth was the man sitting on the largest stack in the room with 196,100 in chips. Following closely on Voth's heels are Mike Kunze (188,000) and Thomas Richter (176,100), also both from Germany. In fact, all top five players from Day 1a are from Germany and six of the top ten total.

Building a stack to bring to Day 2 was the first step to adding the coveted title of EPT Main Event champion to one's résumé, but unfortunately, that dream was dashed for several other well known faces. The likes of Justin Bonomo, AP Phahurat, Konstantin Puchkov, Steve O'Dwyer, Jeff Rossiter, Rupert Elder and Season 9 EPT London Main Event champion Ruben Visser all fell before the final hand of the day was dealt.

High-roller wizard Dan Smith was also in attendance for Day 1a. While Smith built a sizable stack early and seemed poised to continue his success throughout the day, he ran into a few hands that led to the ultimate destruction of his chips. First, at 150/300/25, we found Smith involved in a three-way pot where the board read

. With well over 19,000 already in the middle, Smith pondered for about one full minute before moving out a bet of 12,800. Pietro Paolo Sibione flat-called, and the third player got out of the way. The

completed the board, and Smith went into the tank for about two minutes before the clock was called. However, Smith tapped the table before the floor staff arrived at the table, and Sibione checked right back. Smith showed the

, but was saddened to find Sibione show the

for a better pocket pair.

Smith found his final hand later in the level when he tangled with Dominik Nitsche. The board read

when we arrived at the table, and Smith moved in his last 28,000. Nitsche called only to find out that he was just slightly ahead.

Despite not having a made hand, the PokerNews Odds Calculator told us that Smith still had a 47.73% chance to double up. Fortune did not smile on Smith, however, as the

on the river bricked out and sealed his fate. Nitsche, on the other hand, continued to build his stack throughout the day and will return for Day 2 with a stack of 137,500.

The second and final starting flight of players will return to the Grand Hyatt Berlin on Monday at 12:00 CET. These players will also play eight levels before both fields combine for Day 2 action. Be sure to stay tuned to the PokerNews live coverage as we bring you the latest from the felt.