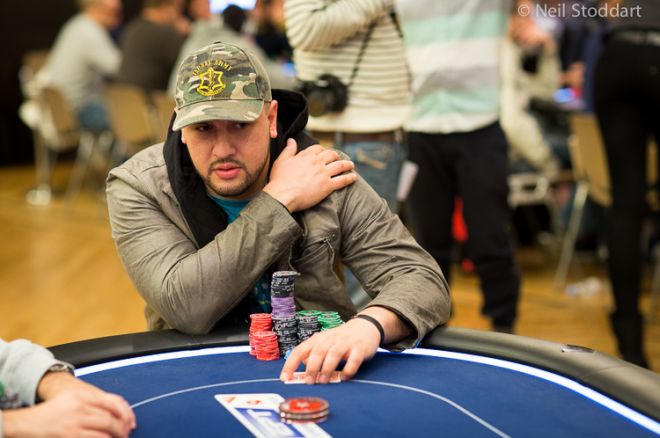 On Monday, Season 9 of the European Poker Tour continued with Day 1b of the EPT Berlin Main Event. Of the 565 players who registered on Day 1b, 314 remain and the leader was Michael “The Grinder” Mizrachi. Mizrachi bagged 175,400 in chips, and he will be fourth overall entering into Day 2.

Mizrachi rarely plays in EPT events, and has never cashed, but he’s well on his way to a deep run in the capital city of Germany. The Grinder won a large three-way all-in pot after the dinner break, eliminating two opponents. After a series of bets and raises, the three-time World Series of Poker bracelet winner and two-time Poker Players Championship winner had two players at risk holding pocket aces. One opponent held two kings, the other two tens, and neither could make a set, straight or flush, and Mizrachi rocketed up the charts to 125,000 in chips. Despite doubling Nicolas Chouity in the second-to-last hand of the night, Mizrachi bagged more chips than any of his opponents.

Robin Yitalo, Daniel Reijmer, George Clyde-Smith and Sam Grafton also finished the day with six-figure stacks. Grafton bagged 135,900 in chips, making a crucial flush in Level 4, but his main focus was being a friend. He tried to get Griffin Benger to give his mate Chris Brammer a massage for an entire level, but the negotiations broke down. Brammer never received a much-needed “pick me up," and was eliminated later in the day.

Wheeler had his kings cracked by Glen Cymbaluk on a queen-high flop. Cymbaluk called Wheeler’s all-in shove with king-jack, leaving himself with just two outs, and low and behold the river brought a jack. Volpe took a similar beat when an opponent over-shoved on a king-high flop with king-jack. Volpe was quick to call with pocket aces, but the player rivered a third king.

Williams’ bust out hand was especially interesting. The Team Pro moved all in with pocket tens on a nine-high board, and was called by two opponents. One player, [Removed:119], held ace-nine for a pair of nines, and the third player held ace-five of clubs for both flush and straight draws. The turn was a red nine, the river a red ace, and Bensadoun won. Williams, who flew in Monday morning to play the event, was eliminated and off to the airport once again.

Season 8 EPT Berlin winner Davidi Kitai and Season 6 winner Kevin MacPhee both survived Day 1b. Despite losing a sizable pot with queens against Richard Toth’s aces, MacPhee bagged 34,900 chips. Kitai, who was on the EPT Live feature table for the majority of the day, bagged 32,100.

If you add the 565 players who registered on Day 1b with the 347 on Day 1a, you get a total field size of 912. That makes this event the second-largest EPT Berlin Main Event in history, and the largest since Season 6 (945).

Day 2 will begin on Tuesday at 12:00 CET. Be sure to check back with the PokerNews Live Reporting Team for all of your exclusive, up-to-the-minute live updates straight from the tournament floor.