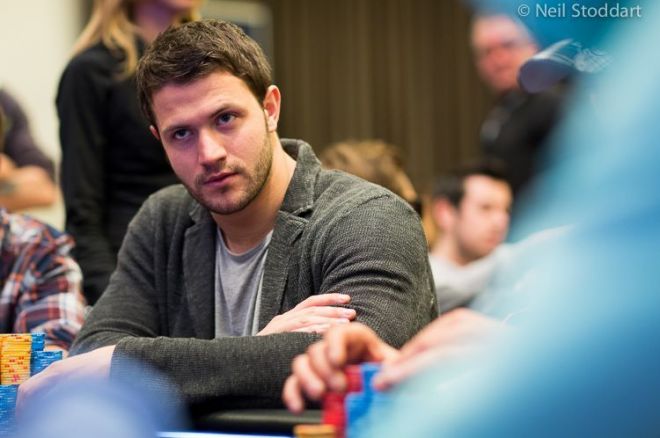 On Thursday, Season 9 of the European Poker Tour continued with Day 4 of the EPT Berlin Main Event. After five more levels of play, the chip leader is German Roman Herold. On one of the final hands of the night, he and Alexander Helbig, who was the chip leader at the time, played in a more than 2 million-chip pot — the largest of the tournament thus far. Helbig flopped two pair, but Herold rivered a better two pair, and called a 500,000-chip bet.

Herold’s rail went into a frenzy as the German raked in the pot, and he will lead the remaining 17 players at the start of Day 5 with 4.485 million chips.

Helbig, who ascended to the chip lead during Level 22 after he eliminated Pratyush Buddiga, bagged the fourth-largest stack with 2.040 million.

Day 4 began with 55 players vying for EPT glory and a boatload of purple €500 notes. However, for a majority of them, their dreams would turn to nightmares. Several players busted during the first level of play, including Thomas Hall, Ronny Voth, Sandra Naujoks and Liv Boeree.

Boeree lost a race holding ace-king against Natalie Hoff’s pocket eights, leaving her with just three big blinds, and two hands later she was all in and at risk with king-ten against Kevin Stani’s nine-four. Stani made a pair of nines, and Boeree was eliminated in 48th place, earning €15,000.

At the start of Level 21, Dashgyn Aliev won a huge, 1.6 million-chip pot. Facing a four-bet shove and a five-bet re-shove, Aliev called with two red aces. They held against Colin Moffatt’s ace-king and Daniel Reijmer’s pocket tens. Reijmer was eliminated that hand, while Moffatt was eliminated shortly thereafter.

The end of Level 21 produced two incredible hands, one that eliminated Bryn Kenney, and one that took out start-of-day chip leader Aku Joentausta.

In Kenney’s hand, Olivier Busquet cold four-bet jammed for 247,000 over an open from Helbig and a three-bet from Kenney. Helbig called the jam, Kenney re-shoved for 540,000, and Helbig called. Both Helbig and Busquet turned over ace-king, giving Kenney and his two black jacks a sizable advantage, but the flop produced an ace. The turn and river both bricked, and Kenney was eliminated.

In Joentausta’s final hand, he moved all in with ace-jack on the turn of an ace-high board. He was called by Herold, who held two pair, and the river was insignificant. The Fin was eliminated in 31st place, earning €22,000.

With Buddiga’s aforementioned elimination against Helbig, the remaining 24 players redrew for the final three tables. It was there where Freerk Post lost a massive cooler against Russian Aliev. When the dust settled, Post was all in and at risk preflop with two queens and dominated by Aliev’s pocket kings. The men held, and the Dutchman hit the rail in 24th place, earning €27,000.

There was another big cooler during Level 23, this one coming at the feature table. After check-raising American Calvin Anderson on the turn of a king-high board, Khiem Nguyen moved all in for 622,000 on the river when a repeat king completed the board. Anderson called with a full house of sixes over kings, but Nguyen had that beat with jacks full of kings. Nguyen went on to bag the third-most chips, while Anderson will have to work with just under 19 big blinds.

Ohlsson was all in and at risk with ace-jack against the ace-king of Robert Auer and the pocket queens of Helbig. Auer found a king, virtually tripling up, while Ohlsson was eliminated in 18th place, earning €27,000.

Play will resume on Friday at 12:00 CEST. The 17 returning players will battle it out until they reach an official final table of eight. Be sure to check back to PokerNews.com for all of your exclusive live updates straight from the tournament floor.