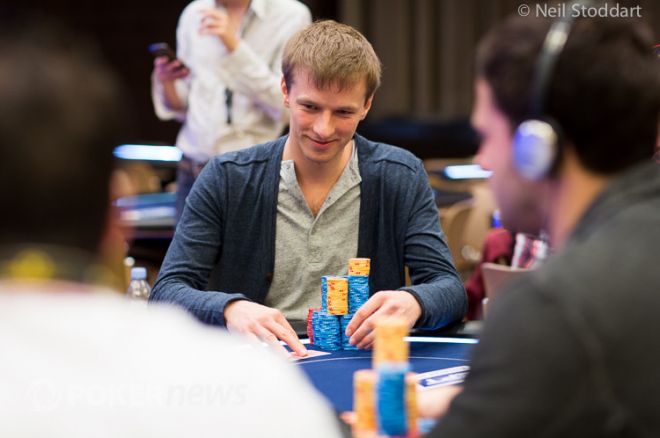 The penultimate day of the 2013 European Poker Tour Berlin Main Event nearly came and went in quick fashion on Friday. After a little more than six hours of play, 17 players were whittled down to nine, but from there it took nearly six more hours before one more player busted to create the official eight-handed final table.

The way many hands played out when nine handed had the commentators on the live stream confused and the hands-per-hour rate was very slow which added to reason for such a long day.

When the day did end it was Germany's Robert Haigh entering Saturday's final as the favorite to win the €880,000 top prize as he bagged the most chips with 5,495,000.

Here's how the final table stacks up:

Unfortunately for those watching the EPT live stream, most of the eliminations came from the outer table during the first half of the day. The tournament became a two-table affair after Kevin Stani was eliminated in 17th place. The only former champion left was wounded and then finished off by Roman Herold. The fatal blow came when his dominated ace was still second best by the time the river fell.

Phillippe Barouk was very unlucky to bust in 16th when his aces were cracked, and after him came the elimination of the dangerous Olivier Busquet. He was left very short and managed to double up once before dropping back once more. Then he doubled up again before his third flip of the day was one too many to survive. His three-bet all in with ace-ten failed to stay ahead of Yasar Guden who called with king-queen and hit a king.

Matias Kesanen was at the feature table all day and was at the center of stalling controversy. He was accused of taking too much time in order to move up the payout ladder and his actions have apparently split the poker community back in his native Finland. Whether his actions were right or not they soon became a part of history as he was eliminated in 14th place. His ace-ten was no match for Herold's pocket queens on a queen-high board. However, his stalling plan proved somewhat successful as he received €7,000 more than Busquet.

After a period where chips were moved around from one player to another, the outer table witnessed two quick eliminations when Khiem Nguyen and Yasar Guden departed within minutes of each other. One-time chip leader Nguyen shoved his short stack in with ace-seven and ran into Alexander Helbig and his pocket nines in the small blind. Guden was eliminated in 12th by Robert Haigh, who was starting to control the table by this stage.

The main event was down to its final 10 players from 912 starters after Robert Auer went in 11th to Lasse Frost, and it was a cooler. Both players flopped trip queens but the Dane had the better kicked and survived the turn and river after the chips went in on the flop. The tournament was reduced to one table after the elimination of Calvin Anderson in 10th place. For the neutral viewer, the final will be a less entertaining affair without the deepest placed American in the field. He was the one who pushed the action for the entirety of his stay on the feature table. His high variance style caught up with him though when he ran pocket fives into the queens of Pacal Vos.

Apart from bubbling the money in the main event, the next worst place to bust may well be ninth. You're at the unofficial final table and can almost smell the tension, excitement and festivities that go along with making the final day of Europe's biggest and most prestigious poker tour. And then you bust. After several hours on the bubble, the poor soul put through experience was Dashgyn Aliev. He moved all in with ace-queen only forAlexander Helbig to find queens in the next seat.

Aliev's elimination left eight very happy players who will return on Saturday at 12:00 p.m. CET where each of them will be hoping to follow in the footsteps of previous EPT Berlin champions like Kevin MacPhee, Ben Wilinofsky and Davidi Kitai. Due to the excessively long day the players will be much shallower than any final table this season so the action is expected to be fast and furious from the start.

Be sure to check back to PokerNews.com Saturday as we bring you exclusive live updates from the final table until the newest EPT champion is crowned!