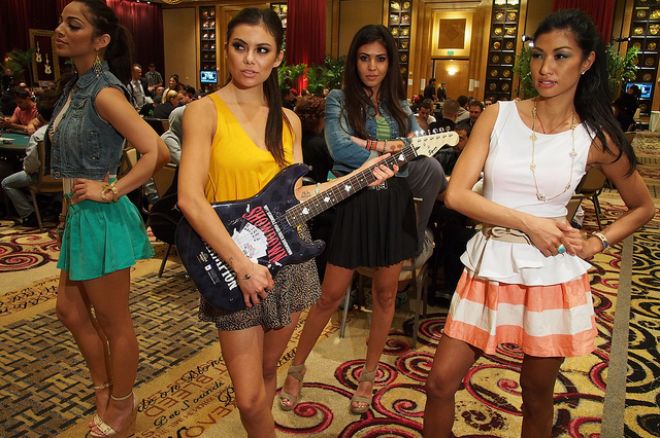 Day 2 of the 2013 World Poker Tour Seminole Hard Rock Showdown played out on Saturday as the remaining 222 players from a 542-player field returned to the Hard Rock Casino in Hollywood, Florida. After four levels of play, just 87 players remained in contention for the $660,395 first-place prize. The man best positioned to capture it is chip leader Shaun Deeb, who bagged 533,000.

Action recommenced at Level 12 with the blinds at 600/1,200/200 and it didn’t take long for the casualties to mount. Minutes into play, Faraz Jaka opened for 2,800 under the gun only to have Joe Kuether move all in from the button for 32,000. Jaka called with the

of Kuether. The PokerNews Odds Calculator had Kuether as a 54.80% favorite, but the

flop hit Jaka with two pair and made him an 88.38% favorite. The

turn left Kuether with just a 4.55% chance of surviving the hand, and that dropped to zero when the

peeled off on the river.

flop inspired fireworks between him and 2011 PCA champ John Dibella. Gates got his last 40,000 or so all in holding the

for an open-ended straight flush draw, while Dibella had flopped a set with the

river helped Gates and he was eliminated from the tournament shy of the money.

Even though he had top pair, Deeb was drawing dead to Gregg’s set of aces. The

river were run out for good measure, and Deeb was left with 48,000 after the hand. While many players would be tilted and punt off their remaining stack, Deeb was having none of it and worked it back up to 300,000 by the end of the level!

, which was ahead of Dolan’s

and Dolan was sent to the rail while Deeb chipped up to 416,000. Toss in the elimination of Adam Geyer in the last three hands of the night, and Deeb rebounded to finish with the chip lead for the second day in a row.

It’s also worth noting that both Paul Volpe (396,500) and Matt Salsberg (262,500) advanced to Day 3. Each of those men have had a remarkable year in Season XI of the WPT, the former with $1097,183 in winnings and the latter $740,190. The two men are tied atop the Player of the Year Leaderboard with 2,350 points. That hotly contested race won’t be settled for a while as there are still three more WPT events remaining, but both will add to their totals down in Florida.

Speaking of Volpe, he was the ClubWPT Player of the Day.

Day 3 is set to begin at noon EST on Sunday. Be sure to return to PokerNews for a full recap of the action.