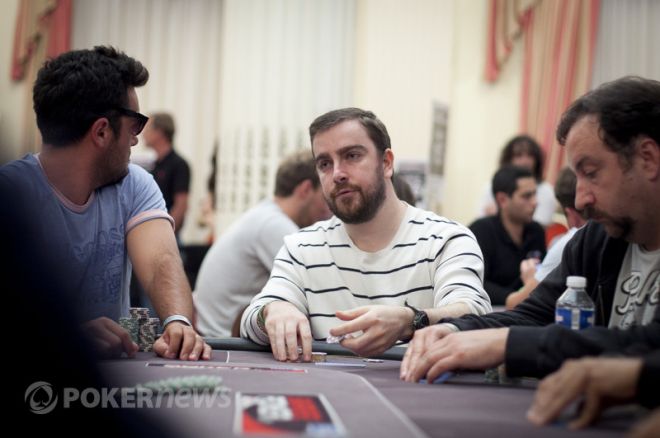 The inaugural World Series of Poker Asia Pacific (APAC) continued in Melbourne Friday with Day 1b of Event #1: $1,100 No-Limit Hold'em Accumulator. After 329 players turned up for the first flight on Thursday, another 666 entrants hit the felt in the Crown Poker Room on Friday, bringing the total number of entrants to 995. The third and final flight of Event #1 will take place on Saturday.

The unique "accumulator" tournament is the first of five bracelet events at the 2013 WSOP APAC. The format allows players to participate in all three Day 1 starting flights and combine all of their chips from those flights to take to Day 2, which will commence on Sunday.

After eight hours of play on Day 1b, only 54 of the 666 players survived, with former WSOP November Niner Antoine Saout leading the way with 58,875 in chips. The Frenchman made a late charge on Day 1b to surpass Daniel Levy and his 56,750.

Saout got off to a good start on Day 1a but ultimately fell short of advancing. His fortune improved on Friday and he will boast one of the larger stacks on Day 2 regardless of whether he takes another shot on Day 1c. He said via Twitter late Friday night that he hasn't decided whether he will play on Saturday.

Thirteen-time WSOP bracelet winner Phil Hellmuth returned on Day 1b after amassing a 20,650-chip stack on Day 1a. However, was unable to survive a second straight day, claiming on Twitter that he failed to win a single pot on Friday. According to the WSOP.com live updates, Hellmuth's last stand began when he raised preflop to 475 and Trevor Saunders called from the cutoff to see a flop of

. Both players checked and the

fell on the turn. Hellmuth led out for 500, leaving 875 chips behind in his stack, and Saunders min-raised to 1,000. Hellmuth agonized over his decision before committing the rest of his stack. Saunders called for the remaining 375, and the cards were tabled:

Hellmuth had heaps of outs to stay alive, but the

on the river sent him to the rail early on Day 1b. He'll have another chance to increase his stack when Day 1c begins on Saturday.

Other notables sent to the rail on Day 1b were Daniel Negreanu, Antonio Esfandiari, Bertrand "ElkY" Grospellier, Marvin Rettenmaier, JC Tran, Jesse Sylvia, and reigning WSOP Main Event champ Greg Merson, who is playing in his first live tournament Down Under. Merson lost a flip with

midway through Day 1b. He'll likely have another go at it on Saturday.

Dan Kelly finished Day 1a as the chip leader with 66,250 but was unable to add any to his stack on Day 1b. The 2010 WSOP bracelet winner is still the overall leader after two flights as only three players were able to advance on both days: WSOP bracelet holder Andrew Hinrichsen (30,150 total chips), Craig Blight (36,225) and Ian Aldridge (21,325).

Day 1c will begin at 12 p.m. local time on Saturday and PokerNews will have a daily recap at the conclusion of play. We'll also be speaking with players about the brand new "accumulator" format, so stay tuned for that and much more from Melbourne, Australia!