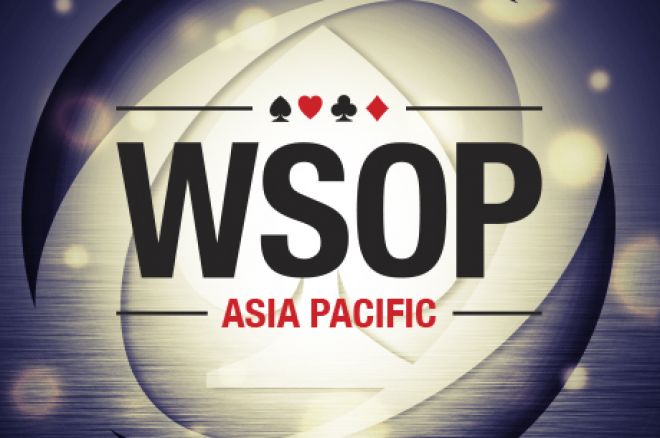 The last bracelet event before the Main Event kicked off Tuesday at the World Series of Poker Asia Pacific (APAC) at Crown Casino in Melbourne, Australia. Event #4: $5,000 No-Limit Hold'em Six-Max attracted the best of the best in Australia and around the world as approximately 170 players took part in the tournament on Day 1. Registration will remain open during the early levels of Day 2, meaning we may see the field grow even larger on Wednesday.

The unofficial chip leader at the close of Day 1 was former European Poker Tour champ Ben Wilinofsky who bagged 160,400. He was followed closely by Aussies Sam Higgs (151,525) and Jonathan Karamilikis (149,350), who is coming off a runner-up finish in Event #1 on Monday.

Karamilikis was seated with fellow Aussie Jackie Glazier for much of Day 1. The two were also seated together during the latter stages of Event #1, and on Tuesday, Glazier admired Karamilikis' ability to get maximum value out of his big hands. According to a report at WSOP.com, Karamalikis and another player were staring at a board reading

, and Karamalkiks checked. The other player moved all in, and Karamalikis called instantly with the

for trip kings. His opponent showed the

, meaning Karamalikis needed to fade any club but the ace, and he did just that as the

"You’re like Yoda," Glazier said to Karamalikis as the other player left the tournament area. "You can just make them put their chips in."

Rather than take the night off following his victory in Event #2, Jim Collopy took advantage of the late registration in Event #4 and dove right in Tuesday night. He even managed to double up late in the day. On a flop of

, Collopy raised all in over the top of an opponent's bet for around 16,000 total and the other player called, creating a pot worth around 40,000. Collopy had the

and was well out in front of the other player's

. Collopy's hand held up through the turn and river, and he used those chips to advance to Day 2.

Day 2 will get underway at 12:00 p.m. local time and is scheduled to play down to a final table of six. Stay tuned to PokerNews.com for a full recap of the action after the completion of play.