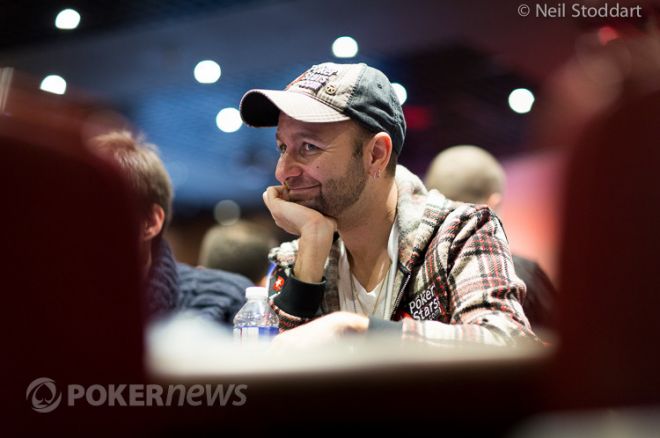 Earlier this week, poker superstars Daniel Negreanu and Phil Ivey shared headlines as the two leaders at the final table of the World Series of Poker Asia-Pacific Event #3, a $2,200 Mixed Event that Ivey went on to win and earn his ninth gold bracelet.

The two friends shared a similar spotlight on Thursday, but this time it was for the WSOP APAC Main Event.

Negreanu was the unofficial chip leader after five 90-minute levels on Day 1 of the AUD$10,000 WSOP APAC Main Event, the first ever held in Australia. Approximately 390 players filled the Crown Poker Room Thursday evening for the historic tournament, and that number will likely surpass 400 before registration closes at 8 p.m. on Day 2.

Negreanu had the biggest stack in the room when play concluded, thanks to a massive pot he won against recent WSOP APAC bracelet winner Jim Collopy near the end of the day. According to WSOP.com, Negreanu opened with a preflop raise to 675 (blinds 150/300/25) from under the gun, and three players called, including Collopy from the button. The flop came down

and the big blind checked to Negreanu, who bet 1,700. Only Collopy called, and the

came on the turn. Negreanu led again, this time for 3,000, and Collopy raised to 8,800. Negreanu called, and a crowd began to gather around the table as the dealer rolled out the

on the river. Negreanu checked, and Collopy bet enough to put Negreanu all in for his last 29,000. Negreanu snap-called and showed the

for a rivered full house. Collopy showed the

for a straight, but the huge pot was raked over to Negreanu. He finished the day with 136,050 in chips.

Ivey was playing his first event since winning bracelet No. 9 earlier this week, and he picked up right where he left off, spending part of the day as chip leader. In one of his biggest pots of the day, Ivey and two other players (including 2012 Octo-Niner Jeremy Ausmus) saw a flop of

after about 2,000 chips went in preflop. All three players checked the flop, and the

hit the turn, prompting Ausmus to lead out for 3,100. Ivey raised to 8,100 and both players called, creating a large pot before the

landed on the river. Ausmus checked, Ivey bet 20,000, and the other player decided to call. Ausmus folded, and Ivey tabled the

for trip threes. That was good enough for the win, increasing Ivey's stack near the 100,000-chip mark. He finished the day among the leaders with 123,300.

Some of the other notables surviving Day 1 with healthy stacks were Mike Watson, Brandon Wong, Greg Merson, Erik Siedel, Ben Wilinofsky, Brandon Cantu, Barry Greenstein and Sam Trickett, who sat down with PokerNews in Australia to discuss how much he wants to win a WSOP bracelet, among other things.

. His opponent held the

for the lead, and held after the

With approximately 390 players signing up for the inaugural Main Event at WSOP APAC, the event has already eclipsed the field that came out for the inaugural WSOP Europe Main Event back in 2007. That event attracted 362 players, albeit with a larger buy-in of £10,350. The WSOP Europe's Main Event saw its largest field ever in 2011 when 593 players ponied up the €10,400 buy-in in its first year since moving out of London and to Cannes.

The action will resume at 2 p.m. local time on Friday. The official prize pool information will be released later in the day when registration closes. We'll have a full recap at the conclusion of play, so stay tuned to PokerNews.com for all the highlights from the Crown Casino in Melbourne.