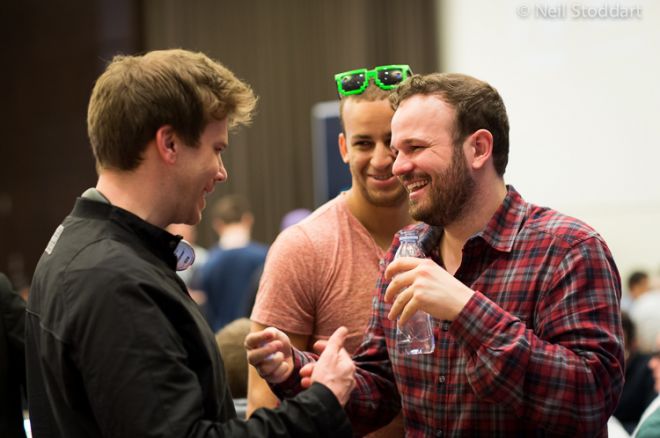 On Saturday, Griffin Benger’s 28th birthday, the Canadian member of Team Ivey won the European Poker Tour Season 9 Berlin High Roller, earning €429,000, a trophy, and of course, the Shamballa bracelet. It is the largest live score of his career, trumping his previous largest score by over half of a million U.S. dollars, and his second career first-place finish.

Benger defeated Aaron Lim heads up. Lim, who recently won the 2013 APPT Seoul Main Event and a bracelet at the 2013 World Series of Poker Asia-Pacific, earned €240,100.

{id:1}Finnish professional player Joni Jouhkimainen entered the third and final day with the shortest stack of the seven remaining players , but it was James Mitchell who bowed out first. Faced with a button raise to 50,000 from Frenchman Philippe Ktorza, Mitchell three-bet shoved for 570,000 in the big blind. Ktorza called with ace-queen, which dominated Mitchell’s ace-jack. Ktorza’s hand held, and Mitchell was eliminated in seventh place, earning €54,900.

Roughly an hour later, Jouhkimainen took his leave in sixth place. The Fin moved all in for five big blinds over a raise from Benger and a three-bet from Ktorza. Benger folded, and Jouhkimainen turned over two sixes. Ktorza had him crushed with two queens and held, recording his second knockout of the day.

From there on out, it was the Griffin Benger show. The Canadian took a big chunk out of Martin Kabrhel’s stack in a three-bet pot. Benger flopped top pair, made trips on the river, and tried to trap Kabrhel. Kabrhel checked behind, but the damage was already done, and Benger was above two million chips.

Lim then eliminated Kabrhel, who entered the day second in chips. Kabrhel open-shoved for less than ten big blinds on the button with ace-deuce, and Lim re-shoved in the small blind with king-jack. Kabrhel flopped a pair of aces, but Lim turned Broadway and eliminated the Czech pro.

Benger then turned his attention to Max Lykov, who started the day as the chip leader. Benger made trips again, this time going runner-runner, and Lykov sent over more than 700,000 chips. Benger became the first and only player to cross the three million-chip threshold, and there was no looking back from there.

Lykov was left with 1.45 million chips, and preceded to lose another million to Lim. Lim got three streets of value from the Team Pro with top pair, receiving a full double up. Lykov was left with seven big blinds, and found himself all in with ace-five against Benger’s ace-nine suited. Benger flopped the nut flush, and Lykov hit the rail in fourth place, earning €102,900.

Benger dominated three-handed play, sitting with over 70% of the chips in play. His first victim was Ktorza, who three-bet all in for 700,000 with king-jack suited. Benger, the original raiser, called with ace-jack suited and held.

Lim doubled to start heads-up play, but could never get above 1.5 million chips. On the final hand, he open-jammed on the button for 870,000 with king-deuce, and Benger made the call with queen-jack. The flop fell

, leaving Lim with just three outs to make Broadway, but it was Benger who made Broadway when the turn bricked off and the

completed the board. Lim added a €240,100 score to his already stellar results, but fell just short of the glory.

Congratulations are in order for Benger, who recorded the first six-figure score of his career. After the win, he joked that this is “probably my sixth or seven-best birthday of all time,” but we here at PokerNews know that this one takes the cake.

Thank you for joining us for coverage of the EPT Berlin High Roller. Be sure to check in next week for the EPT Grand Final in Monte Carlo.