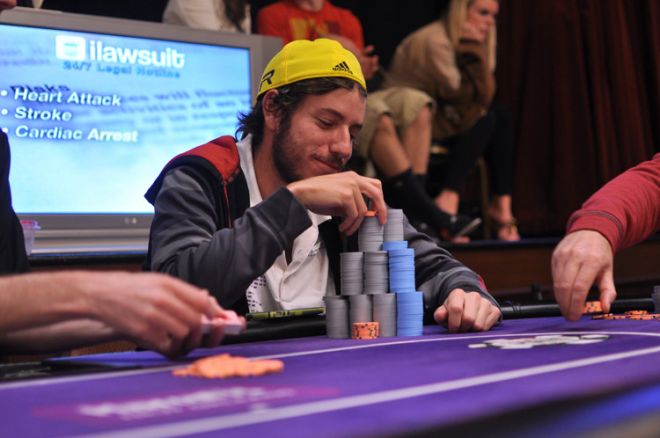 Weinman started his ascent of the counts in Level 22, when he and Rogen Chhabra clashed in a million-chip pot. Chhabra folded a set of queens face up on the river of a three-heart board, and Weinman tossed his cards into the muck facedown. The Harrah’s Cherokee runner-up then crossed the two-million chip threshold when he called two streets from Robert Pantich only to lead on the river when the board paired. Pantich unhappily mucked, and again Weinman opted not to show.

The Atlanta native is a very big favorite to make his second Main Event final table of the season, and is looking to best his finish in the First in Flight state.

Day 2 began with 125 players – only 44 players off of the money bubble. A handful of notables exited early, including Joe Kuether, Kevin Saul, Paul Sokoloff, and Joseph McKeehen.

On the bubble, Earl Merritt opted to fold a pair of aces face up to a three-bet. Merritt had opened to four times the big blind from under the gun, and Tripp Kirk moved all in from the blinds. The player open-folded, and Twitter nearly exploded. Kirk parlayed that good fortune into another deep run, and will return on Day 3 with 575,000. Like Weinman, Kirk has already made a final table this season, finishing third at Horseshoe Hammond.

After the money bubble burst, there was a flurry eliminations including Aaron and Ralph Massey, Brian Green, Eli Loewenthal, and Pedro Rios. Rios held flush and straight draws against two overpairs, but was unable to hit either and reported to the rail.

After the dinner break, Rahul Deevara, who started the day as the chip leader, fell at the hands of Wunstel. Deevara got his money in drawing dead as Wunstel turned a full house, and Deevara hit the rail in 27th place, earning $6,961. Wunstel received a huge double up during the last hand of the night.

Daniel Lowery jumped out to a huge lead at the start of Day 2, but ran into pocket aces twice during Level 25. In one hand, Lowery three-bet shoved with ace-nine suited and Brad Johnson, the original raiser, called with aces. They held, and Lowery was left with less than a big blind. He was promptly eliminated by Sandra Wong, who held two aces.

Soon after, Wong exited as well, and so too did Claudia Crawford, Sean Winter, Nick Jivkov, and Abraham Abud.

Once the field was whittled down to 18 players, they redrew to the final two tables. At that point, Parwez Nawabi, Ben Reason, Panitch, Tzu Yen, Brad Johnson, AJ Atiqi, and Shahirira Assareh were eliminated. Pantich moved all in for nearly twice the pot on a king-high board with a wheel draw, only to be called by Joseph Hebert who held a pair of kings. The river was a brick, and Pantich hit the rail in 16th place.

The remaining 11 players will return at 2 p.m. local time on Monday to battle it out for the $228,600 first-place prize, the ring, and a seat into the Southern Comfort 100 Proof World Series of Poker National Championship. Be sure to tune in then for all of your exclusive, live updates straight from the tournament floor.