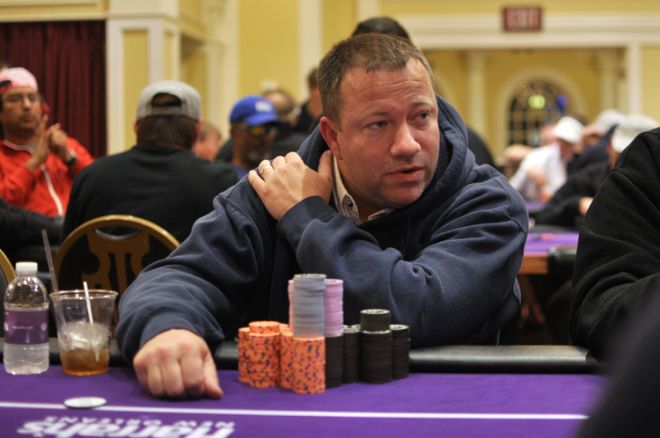 The 2012-13 World Series of Poker Circuit Harrah’s New Orleans Main Event kicked off on Saturday with Day 1a, and leading the remaining 51 players from the first starting flight was Ben Mintz. Representing NOLA, the always-energetic Mintz admitted to running really hot throughout the day. He eliminated 2012 WSOP bracelet winner and “The Original” David Baker en route to bagging an astounding 313,000 in chips. Right behind him was Daniel Lowery, who won his first WSOP Circuit ring earlier this week. Thanks to some big hands at a very tough table, the three-time WSOP Circuit runner-up was able to bag 308,500 in chips.

The day started off well for Ray Henson, who has won three rings during this season of the WSOP Circuit, including one in New Orleans. Henson flopped trips against 2012 WSOP bracelet winner Larry Wright, then rivered a full house after Wright turned a flush. Henson continued chipping up throughout the day, until he played a massive pot with Lowery.

In the hand, Lowery five-bet jammed for roughly 110,000 or so, and Henson snapped it off with the

. Lowery was dominated with the

, but the all-heart flop gave him the nuts and eliminated Henson.

Maurice Hawkins also got off to a fast start only to be eliminated before play concluded for the evening. Hawkins made two pair during Level 5, and crossed the 50,000-chip threshold, but busted the very next level to Jake Schwartz. The two raced for nearly 40,000 chips, Hawkins with ace-king and Schwartz with pocket jacks, and Schwartz flopped a set. The set held when the turn and river both bricked, and Hawkins hit the rail.

Joe Tehan was flirting with six figures during Level 11, but busted in a very large pot against two-time WSOP Circuit ring winner Tripp Kirk. After a series of preflop raises, Tehan was all in and at risk for 68,400 holding two queens, which were dominated by Kirk’s pocket aces. The aces held up, and Tehan hit the rail. After battling it out all day at the toughest table in the room, Kirk was able to bag 245,500 chips.

There was a non-poker celebrity in the field today, Survivor legend “Boston” Rob Mariano. The 37-year old Beantown native, who won Redemption Island, was very lucky to survive an all-in hand at the end of Level 6. Mariano was all in and at risk with two queens against an opponent’s pocket aces, but was fortunate enough to run out a straight. Upon returning from break, Mariano was eliminated holding two kings against another opponent’s kings and a third opponent’s tens. The player with tens flopped a full house, and that was all she wrote for Boston Rob.

The 51 who survived on Day 1a will join the Day 1b survivors on Sunday for Day 2 of the Main Event. Day 1b action will begin on Saturday at noon local time, so be sure to return for all of your up-to-the-minute updates straight from the tournament floor.