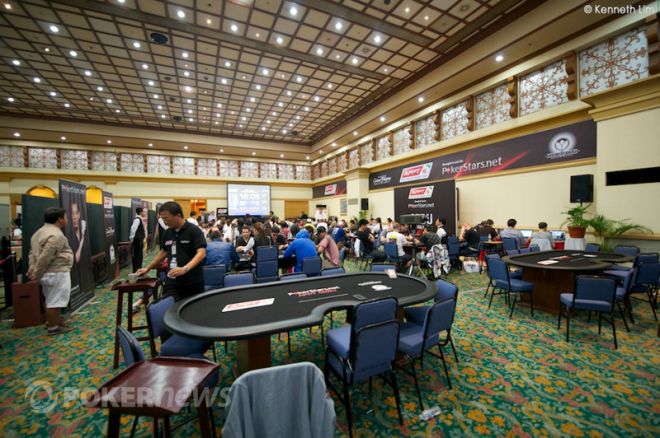 It was a short yet action-packed day in the Philippines for Day 1a of the 2013 PokerStars.net Asia Pacific Poker Tour Cebu Main Event on Wednesday. Six one-hour levels were played, and after the dust settled, Ivan Zalac found himself sitting on an impressive stack of 109,100 in chips while looking down on the rest of the survivors in the field.

One of the most notable stories of the day was Trung Tran's playing. Tran is looking for his second poker title in two weeks in the Philippines, having just taken down the $2,500 buy-in APT Main Event in Manila on April 20. That win was good for $124,000, and he has set himself up for another deep run here where he is second in chips with 105,900.

It wasn’t good news for all of the notables, however. Along the way today, those lost included Dan Kelly, David Borg, Vincent Rubianes, 2012 Asia Player of the Year Yosuke Sekiya and Team Pokerstars Pro Vivian Im, who won this event two years ago. Unfortunately for these players, this is not a re-entry event, so they are done for the tournament.

Play will resume on Thursday at noon local time for Day 1b. You can be sure to find all of the live coverage in the PokerNews Live Reporting Blog all tournament long. And in case you're wondering what you're missing, check out Lynn Gilmartin's tour of the streets of Cebu below.