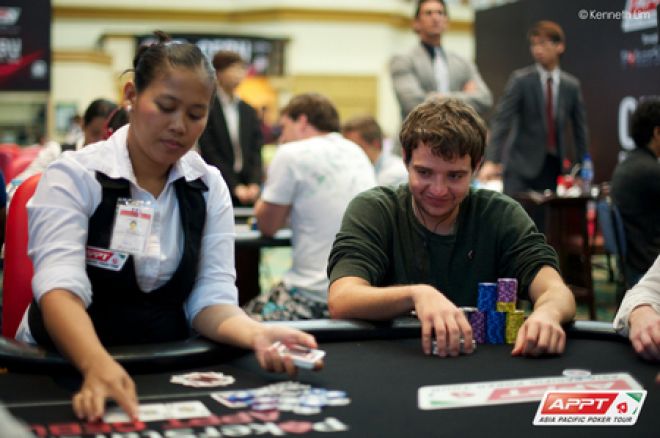 Just over six hours before play ended, 76 players walked through the doors of the Waterfront Airport Casino and Hotel ready to set themselves up for a final table run at the 2013 Pokerstars.net APPT Cebu Main Event. After a full day of play, only 25 still had a shot at that dream. Leading the pack is Daniel Spence, who bagged up a whopping 260,800 chips. He is followed by Anthony Wright, who will bring 224,500 into Day 3.

Our reporters managed to catch Spence pulling off quite a nice bluff in the second-to-last level of the day, getting his stack up to 200,000 in chips. About 75,000 chips were in the middle when both Daniel Francis and Spence checked the turn on a board of

hit the river, Spence fired out 25,000, and Francis went deep into the tank. He thought for a good three minutes before finally folding. Spence asked, "Do you want to see it?" Francis seemed indifferent but eventually said yes, and Spence tabled the

for a busted straight draw.

Of course, not all of our notables could survive the day. We lost Team PokerStars Pro Bryan Huang, as well as Sam Razavi, Ted Wang and Ivan Zalac, who started the day as chip leader.

The 25 players are now off to get some rest before they return at 12:15 local time on Saturday. From there, we will play until we've reach our final table of nine. It should be a fun few hours, so make sure you don’t miss out on it.

And in case you missed it, check out the APPT Cebu party in the video below. They don't call it paradise for nothing.

Photo courtesy of Kenneth Lim from the PokerStars Blog.