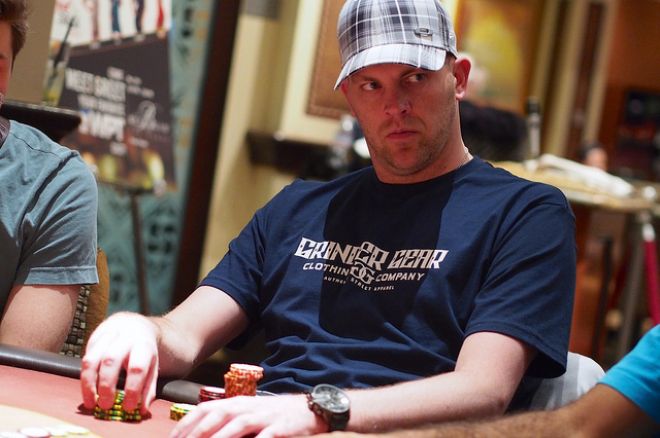 On Sunday, Season XI of the World Poker Tour continued with Day 2 of the $25,000 World Championship at Bellagio. Leading the remaining 67 players was Mike Linster, who bagged 744,000 chips. Linster is a member of the WPT Champion’s Club, winning the Season XI bestbet Open for $296,521.

Ivey was quickly eliminated after registering during Level 8. Hellmuth got off to a fast start, eliminating Bill Klein en route to bagging the 17th largest stack (307,000).

Linster entered the day third in chips and more than doubled his stack. In one key hand, he shoved over a raise and a few calls with two fives, and Allyn Jaffrey Shulman, winner of the 2012 World Series of Poker Seniors' Championship, called with ace-king. The pocket fives held, sending Shulman to the rail.

The New Yorker then won a key pot against David “Doc” Sands during the last level of the night to cement his chip lead. Linster opened then called a three-bet from Sands preflop, only to check-raise Sands on a nine-high flop with two diamonds. Linster fired two more bullets when the turn and river brought a nondiamond eight and ace, respectively, and Sands called both bets. Linster showed ace-five of diamonds for a flush draw turned pair of aces, prompting Sands to muck his hand.

Also at the top of the leader board is fellow New Yorker and Global Poker Index Player of the Year candidate Dan Shak. Upon sitting down, Shak received a huge double with aces against an opponent’s kings, and in the last level of the night, he eliminated Waxman. Waxman was in good shape after flopping top two-pair with

, as Shak only held a gut-shot straight draw with

completed the board on the river to give Shak a Broadway straight. Waxman unhappily hit the rail, while Shak soared into the second chip position.

Day 3 will begin at 12 p.m. PDT on Monday. PokerNews will be providing daily recaps of the action from Bellagio, so stay tuned for another following the completion of play.