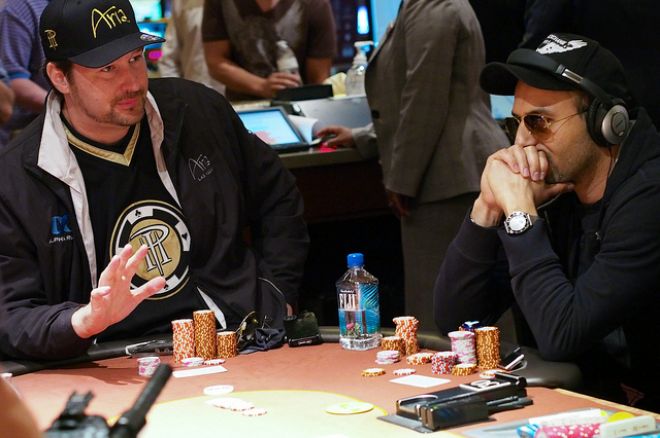 Last August, Marvin Rettenmaier opened the 11th season of the World Poker Tour by becoming the first player to win back-to-back titles in tour history. Now, Amir Babakhani is attempting to close out the season by accomplishing the same incredible feat.

Babakhani leads the final 24 players at the $25,000 buy-in WPT World Championship at Bellagio in Las Vegas. Babakhani, who claimed his seat for this event by winning the WPT Canadian Spring Championship earlier this month, will take a stack of 1,220,000 into Day 4 of the prestigious event, leading a crowd of well-known pros still in contention for the $1,150,297 top prize.

Day 3 began with 67 of the original 146 players hoping to be among the top 15 in-the-money finishers, all of whom will secure a minimum payday of $49,000. Among the early exits Monday were Faraz Jaka, David Sands, John Hennigan, Brian Rast, Ben Lamb, and Antonio Esfandiari, who was eliminated when his

couldn't come from behind against Steven Silverman's

Rettenmaier, the defending WPT World Championship winner, was also eliminated on Day 3. Rettenmaier shoved all in from the small blind for around 13 big blinds with

, and Justin Young called from the big blind with a dominating

, and Rettenmaier was denied a chance to win the event for the second straight year.

Mike Linster began Day 3 atop the chip counts, but the recent WPT Jacksonville champion had a rough day at the tables and ultimately exited in 27th place — 12 spots shy of the money. According to the WPT Live Updates, Linster got the last of his chips in on a flop of

, but Erick Lindgren was in front with

for a flopped straight. Linster needed to improve to a full house to win, but the

river failed to improve his hand.

Others hitting the rail short of the money on Day 3 were Will Failla, Yevgeniy Timoshenko, Tom Marchese, Phil Hellmuth, Noah Schwartz, Matt Giannetti, and current WPT Season XI Player of the Year leader Matt Salsberg, who will secure the honor this week as long as Babakhani and Jonathan Roy don't win the event.

Babakhani emerged as the leader late in the evening, but Brandon Steven won the biggest pot of the day. With the blinds at 4,000/8,000/1,000, Justin Young raised from the button to 20,000, and Steven called from the small blind to see a flop of

Young was in front with a pair of fours, but according to the PokerNews Odds Calculator, Steven was still a 2-to-1 favorite to win the hand with a straight flush draw and two over cards. The turn was the

, giving Steven a straight and a lock on the hand, and the

Other well-known pros advancing on Monday were Dan Shak, Jason Mercier, Lindgren, Jake Cody, Chino Rheem, Andrew Lichtenbrger, and Daniel Negreanu, who is looking to add another huge score to his phenomenal 2013. With a WSOP bracelet and a fourth-place finish at the EPT Grand Final already in his pocket this year, Negreanu is now seeking his ninth WPT final table and third victory on the tour. His last WPT title came in 2004 at the $15,000 buy-in Five Diamond World Poker Classic.

Day 4 of the WPT World Championship will begin at 12 p.m. PDT on Tuesday. All of the players eliminated in the $25K event will have an opportunity to play in the $100,000 buy-in Super High Roller which begins Tuesday at 2 p.m. PDT. This marks the third year of the $100K tournament; Erik Seidel won it in 2011 and Marchese took it down last year.

PokerNews will be providing daily recaps of both events from Bellagio, so stay tuned for highlights following the completion of play.