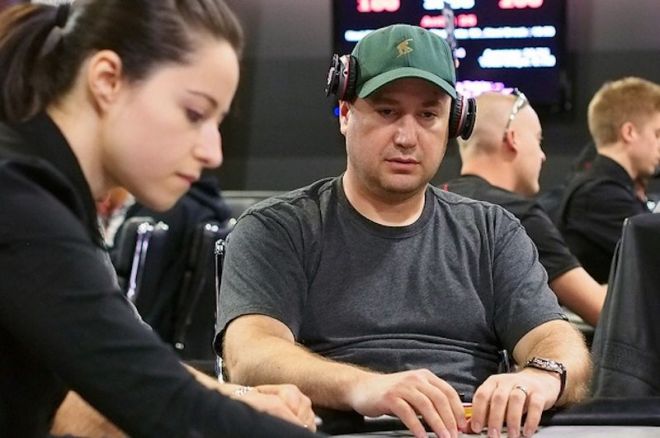 On Monday, the 2013 PartyPoker World Poker Tour Canadian Spring Championship continued for Day 2 action from the Playground Poker Club with 294 of the original 735 players returned for ten more levels of play. At the end of the day only 44 players remained with Paul Klann, who won this year's WPT L.A. Poker Classic, leading the way with 1,793,000 in chips.

Action recommenced in Level 11 with the blinds at 600/1,200/200, but it wasn’t until the following level (800/1,600/200) that things really heated up. According to the WPT Live Reporting Team, that is when up-and-coming poker star Aaron Massey was eliminated from the tournament. It happened when he got his stack all in preflop holding the

and was up against the

of Derek Lerner. The PokerNews Odds Calculator gave Massey a 38.21% of surviving the hand, but that dropped to 22.53% on the

completed the board on the river, Massey hit zero in both chips and chances of winning the tournament.

. It was a classic race, and one that came down in Khun’s favor as the board ran out

In the very next hand, Burbick moved all in from under-the-gun and a player in middle position moved all in over the top. The rest of the table folded and Burbick tabled the

, which was far behind his opponent’s

. The [kh3h2s10sJd} board was no help to Burbick and he made a hasty exit from the tournament floor.

Reiman had run his big pocket pair into an even bigger one, and he’d earn the distinction of “bubble boy” after the board ran out a dry

It was a classic flip, and Gross was unable to improve as the board ran out

Action will resume at 11 a.m. ET as the returning 44 players look to play down to the final 18. We'll have a full recap for you at the completion of play, so keep it locked in to PokerNews.com for coverage of the WPT Canadian Spring Championship. In the meantime, check out this interview with chip leader Paul Klann, who finished as the ClubWPT Player of the Day.

*Photo and video courtesy of WPT.