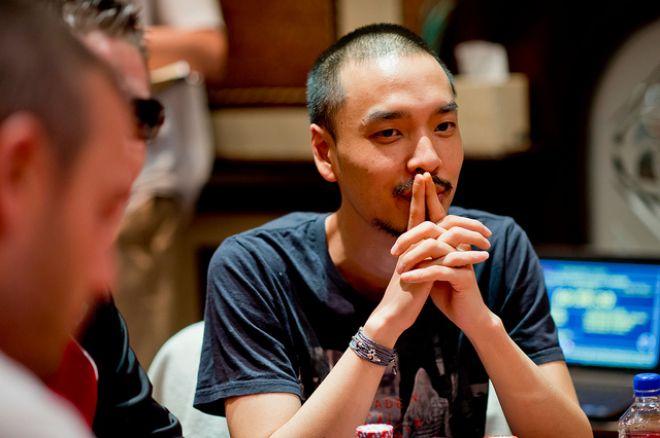 The 2013 World Poker Tour World Championship continued Tuesday with Day 4 action at the Bellagio in Las Vegas. After five 90-minute levels of play, former WPT champs Chino Rheem and Erick Lindgren were sitting atop the chip counts with eight remaining, while Daniel Negreanu was still in contention for his second million-dollar score of the year.

Day 4 began with 24 players hoping to be among the top 15 in-the-money finishers, and several well-known pros went home empty-handed. Andrew Lichtenberger was the first to bow out, finishing 24th after his

was run down by Rheem's

. Jason Mercier, still seeking his first WPT title, was sent packing in 23rd place after having his aces cracked by Matt Hyman.

Matt's twin brother Zach Hyman was eliminated by Brandon Steven in 22nd place, and he was followed to the rail by [Removed:14], AP Phahurat, Jake Cody, Andrew Mackenzie and Andy Frankenberger. With 16 players remaining and the money bubble in place, Erick Lindgren and Hyon Kim got involved in a critical preflop confrontation that ended up being one of the key hands of the day.

According to the WPT Live Updates, Lindgren moved all in from the hijack for 147,000, and Kim called from the cutoff. Lindgren showed the

and was at risk against the pocket eights of Kim. The dealer rolled out a board of

Kim was still in decent shape with 470,000 after that hand, but minutes later found himself in a preflop battle against Dan Shak. This time, it was Kim's tournament life that was on the line. Kim min-raised to 40,000 from the hijack, and Shak moved all in from the small blind, having Kim's stack covered. Kim paused for a moment before deciding to call, loudly proclaiming that he had pocket tens. But Shak tabled the

, and Kim needed to improve to stay alive. The board came

, and Kim was eliminated in 16th place with no money for his four days of work. The remaining 15 players were guaranteed a minimum payout of $49,210.

Rheem began the day as one of the short stacks, but he went on a nice rush to start the day before taking a commanding chip lead shortly after the money bubble burst. As reported by the WPT Live Updates team, Jeffrey Ishbia raised to 45,000 from the button, and Rheem three-bet to 120,000 from the big blind. Ishbia called, and the dealer fanned a

fall on the turn. Rheem opted to check, giving way for Ishbia to fire 250,000. Rheem responded by moving all in, putting Ishbia to a decision for his remaining 670,000 in chips. Ishbia went into the tank before deciding to call, setting up a pot worth nearly 2 million.

Ishbia's pair of fives were out in front of Rheem's ace-high flush draw, and he was in good position to take the chip lead, but the

on the turn gave Rheem his flush, and Ishbia was eliminated in 15th place.

Sam Goldman lost a big pot to Lindgren on the 17th hand of the unofficial final table when he folded trip kings face up on the river to leave him with five big blinds. He got the rest of his stack in preflop six hands later with the

. Despite being a huge favorite, Goldman was knocked out when Babakhani paired his king on the turn. He collected $57,998 for 10th place.

That pot put Babakhani in good shape to make his second straight WPT final table (he won the WPT Canadian Spring Championship earlier this month), but his hot streak ended at the hands of Rheem in the last hand of the day. With the blinds at 12,000/24,000/4,000, Hyman raised to 50,000 from early position, and Rheem three-bet to 125,000 from middle position. Babakhani then four-bet shoved for 470,000, forcing a fold from Hyman, but Rheem called and tabled the

. Babakhani was in trouble with his

board ended his tournament in ninth place for $70,000.

Amid all the action late in the day, Daniel Negreanu managed to quietly sneak into Day 5 with a short stack of 545,000 (18 big blinds). If he can survive one more day, "Kid Poker" will reach his third straight Main Event final table; he won the WSOP APAC Main Event in April and followed that up with a fourth-place finish at the EPT Grand Final earlier this month. That, combined with the presence of controversial figures like Rheem and Lindgren, will make for an interesting conclusion the 2013 WPT World Championship.

The event will resume at 12 p.m. PDT on Wednesday when the final eight will play down to the six-handed televised final table. PokerNews will be providing a recap from Bellagio, so stay tuned for highlights following the completion of play.