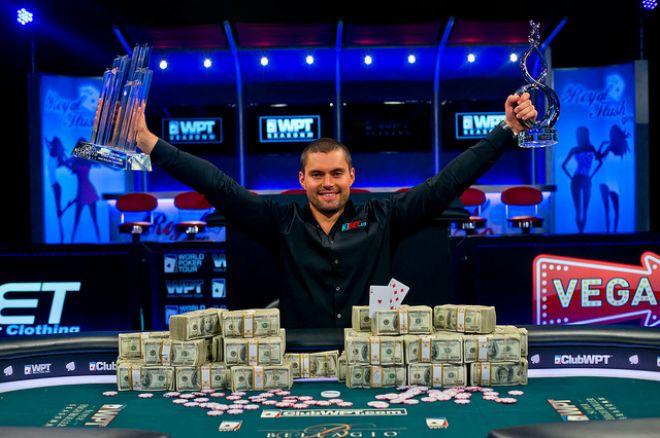 The $100,000 Super High Roller at the 2013 World Poker Tour World Championship came to an exciting conclusion Thursday night. After three days of play at the Bellagio in Las Vegas, David "Doc" Sands bested a star-studded field of 21 to capture the $1,023,750 prize — his second million dollar score of 2013.

Sands defeated Joseph Cheong for the title after a brief heads-up match. Cheong, who finished runner-up in the World Series of Poker Asia-Pacific $50,000 Re-Entry High Roller last month, fell just shy of the winner's circle again. He claimed$614,250 for his runner-up result, while Daniel Perper took third for $409,500. The other three members of the televised final table left empty-handed because only the top three places received money.

The final table began with two players barely holding on with short stacks. Daniel Perper and Andrew Robl each entered Day 2 with 10 big blinds, while the other four players had at least 80. Robl was the first player to commit his stack and was lucky to find pocket aces in the small blind, but James Courtney also had aces in the big blind. Despite an all-club flop that gave Courtney a freeroll to a flush, they chopped the pot and Robl was still alive.

Perper managed to double up to twice to stay afloat, and Robl doubled through David Sands. But Robl could only stave off elimination for a short time. According to the WPT Live Updates, Joseph Cheong min-raised to 48,000 from the cutoff, and Robl moved all in from the button for 204,000. Courtney smooth-called from the cutoff, and Cheong elected to fold.

didn't bring any help to Robl, who exited in sixth place without any prize money.

While Perper was climbing out of the basement, Steven Silverman's stack was slowly dwindling. The recent €25,000 High Roller champion at the 2013 PokerStars and Monte-Carlo® Casino European Poker Tour Grand Final was eventually knocked out in fifth place of this event, and it was Perper who handled the job. Cheong min-raised to 100,000 from the cutoff, Silverman moved all in from the cutoff for 685,000, and Perper reraised all in over the top for 960,000 from the big blind. Cheong got out of the way, and Silverman was at risk.

The board ran out an uneventful

With three spots paying out a minimum of $409,500, the final four players were staring at a massive money bubble. The first player at risk of bubbling was Cheong, but he doubled through Sands when his

. Sands then returned the favor, however, doubling through Cheong on the very next hand with

Cheong and Sands then went to battle again, and Cheong once again survived when his

. That left Courtney as the shortest stack, but he also doubled up through Sands with

The wild money bubble raged on until Courtney finally met his demise. According to the WPT Live Updates, Perper min-raised to 120,000 from under the gun, and Cheong (small blind) and Courtney (big blind) called to see a flop of

. Action checked over to Perper, who bet 160,000, and only Courtney called. The turn was the

and Courtney moved all in for 660,000. Perper called instantly and tabled

for two pair, while Courtney showed

for a pair and a straight draw. The

fell on the river, and Courtney exited directly on one of the largest money bubbles of the year.

The three remaining players traded the chip lead several times before Perper was sent to the rail in third place. With the blinds at 40K/80K/10K, Daniel Perper moved all in for 1,170,000 from the button, and Sands re-shoved from the small blind. Cheong folded, and the cards went on their backs:

That left two of the top young poker pros in the world battling for the title. Sands entered the heads-up match with a 3-to-1 advantage over Cheong, and it took only four hands to bring the tournament to an end. On the last hand, Cheong moved all in for 1,135,000 (11 big blinds) with

, and Sands called with

. Cheong needed help to stay alive, but the

board gave Sands the victory. With the win, Sands joined Erik Seidel and Tom Marchese as the only winners of the WPT $100,000 Super High Roller.

The WPT World Championship comes to a close on Friday with the conclusion of the $25,000 Main Event. David "Chino" Rheem and Erick Lindgren are leading the way, and Jonathan Roy can claim theSeason XI Player of the Year award with a victory in the event. Stay tuned to PokerNews.com as we'll bring you a full recap of the final table at the conclusion of play.