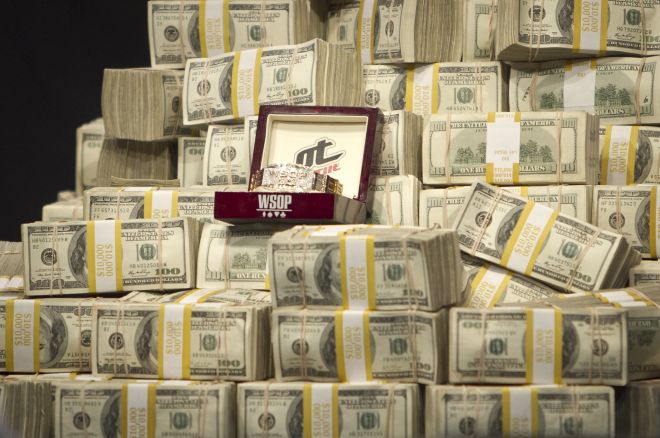 In one month, the 2013 World Series of Poker will storm back into the Rio All-Suite Hotel & Casino for the 44th edition of the greatest tournament series the world has to offer. Like any other year, the WSOP aims to better its overall performance from last year, and this year that includes more events on the schedule and a few big additions to the slate.

The 2013 WSOP will begin May 29 and run through July 15. The 61-event schedule from a year prior has been increased by one, and the 2013 version will boast 62 opportunities to win a gold bracelet. When combined with the five gold bracelets given out at WSOP Asia-Pacific and an estimated seven at the upcoming WSOP Europe, that's a whopping 74 times one could enter a poker tournament this year in hopes of winning the coveted gold bracelet.

The festivities kick off with the $500 Casino Employees No-Limit Hold'em event on May 29 at 12 p.m. Las Vegas time. While this event is always a favorite amongst those within the poker industry, the real start to the WSOP begins later that day with the highly anticipated $5,000 No-Limit Hold'em 8-Handed event at 5 p.m. This event is new to the schedule this year, and poker players are raving about its addition thus far. The bottom line is that 10-handed poker is dead. Pretty soon, nine-handed poker will be dead in most formats, so making the move of adding a larger buy-in eight-handed event is an excellent addition by the WSOP and should draw a huge turnout of star-studded players.

On May 30, the first small buy-in no-limit hold'em event kicks off at 11 a.m. Yes, that's before noon. In case you are wondering about that being a typo, it's not. There are a few events on this year's schedule that host both starting days on the same day, similar to what is done across many of the WSOP Circuit events. While the first flight begins at 11 a.m., the second will start at 5 p.m., and players who bust Day 1a can re-enter on Day 1b.

This is going to be an interesting move for the WSOP this summer, but they might catch some flack because survivors of Day 1a will have much longer rest than those from Day 1b prior to playing on Day 2. Length of rest is always a huge issue with the players at the WSOP, so it will be interesting to see how this new schedule quirk is received.

Of those 43, 29 have buy-ins of less than $3,000. This seems a bit much, but again, it's these events that attract the more common poker players from all over the world.

On June 1, the $1,500 "Millionaire Maker" event kicks off. This event is brand new to the schedule, and will be played with a guaranteed $1,000,000 first-place prize. The prize pool structure will be altered for this event in order to accommodate the guarantee, and the two Day 1s will take place on the same day. Players will be able to re-enter in the second flight if they bust out of the first flight, and things should get really interesting at the final table with the enormously top-heavy payout.

The first $10,000 event on the schedule takes place on June 7, the $10,000 Heads-Up No-Limit Hold'em. This event is restricted to 512 players, and hopefully the WSOP has worked out the hiccup it went through last year with the draw process. All of the players in the event showed up to play, but the start time was delayed a bit while the first-round matches were sorted. Then, numerous players were sent home after receiving byes in the first round, causing some stir amongst the players.

You might be asking yourself why that event is the first $10,000. Well, that's because the WSOP has done away with the $10,000 "championship" events and made the majority of them $5,000 buy-ins. It leads us to believe that the WSOP is hoping to increase field sizes for these events, but it is widely considered that anyone who plays a $5,000 buy-in event would also play a $10,000 version of that same event. You're not going to see a huge drop off in numbers to not make up for the prize money lost by cutting the buy-in in half. While the WSOP may want to keep the number of entries high, the prizes suffer and it's those prizes that the players in these events care about — they don't care if they need to beat 150 players or 200.

Although nearly all of the $10,000 events were slashed in half, the $10,000 2-7 Lowball and $10,000 Pot-Limit Omaha events have remained on the schedule, but that leads us to another interesting twist in the schedule this year. There are a few pot-limit Omaha events with various buy-ins for all levels, but the WSOP did away with the $1,500 2-7 Lowball event this year. This event was a favorite amongst many players, and generated a lot of excitement in 2012. Many top pros dove heads first into the event to play the game for the first time and fell in love with it, but it's going to be hard to get them to continue to play this game without a smaller buy-in other than $10,000 on the schedule.

Staying with $10,000 events, the Ladies No-Limit Hold'em Championship has a $10,000 buy-in this year in a move made by the WSOP that was highly praised by the poker community. With the growing issue of males entering the event, women will receive a $9,000 discount and only have to put up $1,000. Any man playing will have to pay the full $10,000 this year. General consensus throughout the community seems to be that at least one male will enter, but this year his entry should be much more accepted than ever before. Before you tear the man to shreds for entering, be sure to thank him for his $9,000 donation to the prize pool.

Following a two-year hiatus from the WSOP, the $25,000 No-Limit Hold'em 6-Handed event is back. This event was brand new in 2010 and attracted 191 runners. Not only did this event present the WSOP with a huge buy-in spectacle, but it attracted the games largest names. Combining a huge buy-in with even bigger names and a short-handed format is a recipe for success, and the entire poker community is salivating with anticipation of this event's return. This event takes place starting on June 28.

As if bringing back the $25,000 event wasn't enough, the WSOP has followed up last year's $1,000,000 Big One for One Drop with a $111,111 One Drop High Roller No-Limit Hold'em. Six-figure buy-in events are the norm nowadays in any major tournament series, so it's great to see the WSOP finally jumping on this bandwagon. With a chance to win a WSOP gold bracelet, this event should easily surpass 100 players and be one of the largest super high roller events in history, breaking all previous records. This event kicks off on June 26 and will attract marquee names and deep pockets.

We all know that a buy-in of $111,111 isn't in the ballpark of most people, so the WSOP also has the $1,111 Little One for One Drop available. This event allows for unlimited re-entries through the first four levels and takes place starting on July 3. The WSOP did away with rebuy events a couple years ago, but the re-entry format seen in a few events in 2013 leads us to believe that they are slowly making a combat, at least in a slightly altered form.

Almost smack dab in the middle of the $1,111 and $111,111 buy-ins is the $50,000 Poker Players Championship, which takes place on June 30 and is always a fan favorite. This is the event all of the top players look forward to the most, as it holds a huge buy-in and forces players to be able to play a wide variety of games, leading it to much more of a tournament based on one's skill level than some of the other events. Each year, the winner of this event is seen as the best all-around player by his fans and peers.

Last, but certainly not least, is the $10,000 WSOP Main Event. Beginning July 6, this is poker's Super Bowl. This year, there will be three Day 1s and each Day 1 will have its own separate Day 2 before all flights combine on Day 3. Last year, the Main Event was topped by Greg Merson and attracted 6,598 players. It's going to be interesting to see how the numbers end up this year because the WSOP Main Event had its second year in a row losing entrants — 7,319 in 2010, 6,865 in 2011 and 6,598 in 2012. With the beginning of online poker sites launching in Nevada and hints towards WSOP Main Event qualifiers being part of that process, it's surely in the mix for the field size to start to creep back up this year.

As the official live reporting team for the 2013 WSOP, PokerNews will be on hand for live coverage of every single event this summer. Be sure to stay tuned right here to these pages as we continue our WSOP lead up before kicking things off at the end of May.