Doyle Brunson to Forgo Tournament Play at the WSOP 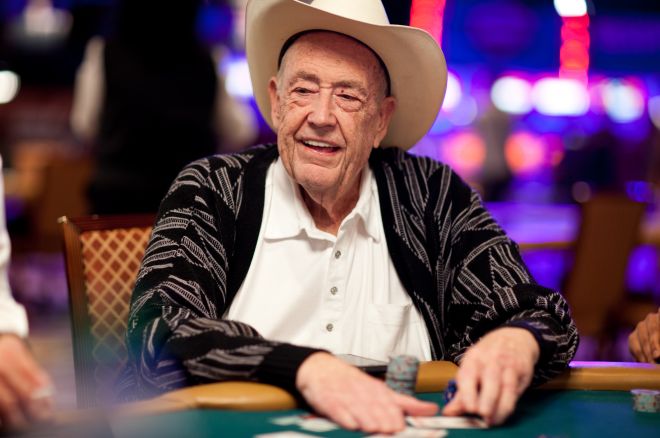 Late Tuesday night, 10-time World Series of Poker gold bracelet winner Doyle Brunson tweeted that he will be passing on tournament play at the WSOP this summer. At 79 years old, Brunson cited that Father Time was finally taking over.

Afraid I am finally gonna give in to Father Time and pass on tournament play at WSOP. #toomanyhours

Over the past couple of years, "The Godfather of Poker" has played in increasingly less and less gold bracelet events during the summer. In 2011, he played just seven events with total buy-ins of $93,000. In 2012, Brunson played just four events with $67,500 in total buy-ins. Each year, the average buy-in was over $13,000 as Brunson played the majority in larger, mixed-game events.

The last WSOP cash on Brunson's esteemed career record came from 2009 when he took 17th in the WSOP Europe £10,000 Main Event in London for £31,198. His last cash on American soil at the Series was previously that year when he final tabled the $10,000 World Championship Seven-Card Stud Hi-Lo event, taking seventh for $62,234.

In 2005, Brunson earned his 10th gold bracelet by winning the $5,000 Short-Handed No-Limit Hold'em event for $367,800 — the third largest score of his long and illustrious poker career.

If it is true that Brunson won't be playing in any WSOP events for the rest of his career, he will undoubtedly be missed. The cheerful smile, walking cane and ten-gallon cowboy hat scooting through the walls of the Rio are provide fans, players and media with a glimpse of a living poker icon and someone that gave so much to the game.

In one of the more fun moments in the history of the WSOP, Brunson raced fellow Poker Hall of Fame member Thomas "Amarillo Slim" Preston in the Rio Rascal 500, and you can check out the video of the scooter race below.