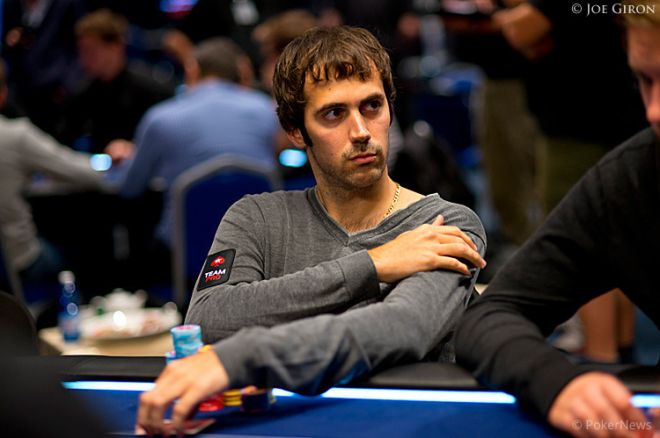 The final event of the European Poker Tour's ninth season began on Monday, and it happened to be the tour's biggest buy-in event. The massive €100,000 Super High Roller at the PokerStars and Monte-Carlo® Casino EPT Grand Final is under way, and after eight levels on Day 1, only 30 players remain. Team PokerStars Pro Jason Mercier is the overnight chip leader with 1,183,000 chips, well ahead of Sorel Mizzi who is second in chips with 885,000. Players will have until the start of Day 2 to enter or reenter the event.

The day started with 16 players but that quickly changed because there was a line at registration that bumped the total to 25. Players continued registering throughout the day, and Patrik Antonius was among the last to buy in for first time during the final two hours on Day 1. Many others had already fired multiple bullets at that point, and it was Phil Ivey who reentered first. Defending champion Justin Bonomo busted Ivey's first bullet when he check-raised all in on the turn with a double gut shot and flush draw against Ivey's set, and he managed to hit on the river.

Two Russians were next to go as Mikhail Smirnov and Ilya Bulychev were eliminated. The former bought back in while Bulychev remained on the rail. Moments later, another player was knocked out as Team PokerStars Pro Jonathan Duhamel ran his pocket tens into Bonomo's queens.

Duhamel was among the players that chose not to reenter right away. Joseph Cheong, Sergii Baranov, Tom Marchese, John Juanda, Steven Silverman, Bertrand Grospellier, and Marc-Andre Ladouceur also decided to call it an early night after losing their initial buy in. Ivey was the only player knocked out twice. Mike McDonald was responsible for Ivey's second bustout as he won a coin flip with ace-king versus tens. Ivey is likely to return tomorrow morning to risk another €100,000.

Mercier climbed to the top after winning two huge hands in a row. First he doubled up through Bonomo, and then he won a pot off Blom. Mercier made sure he went to sleep with the chip lead when he busted the former chip leader Bonomo. Mercier turned a straight and ended up busting Bonomo who held a flopped set. Bonomo bought in again and will start Day 2 with 260,000.

As the day was about to end, Vladimir Troyanovski pulled off the play of the day. Troyanovsky called all in for a pot-sized bet with two sixes on a jack-nine-deuce-ten-four board. Troyanovski's opponent, Dani Stern, showed ace-queen, and Philipp Gruissem yelled, "WHAT!" when the Russian tabled his hand. Troyanovski survived the day with 737,000, putting him fifth on the leader board.

The action resumes Tuesday at noon CET and players can decide up until that point whether or not they want to reenter. Forty-one players bought in on Day 1, seven of whom fired at least one additional bullet. Keep it locked in to PokerNews as we bring you live updates from the €100,000 Super High Roller.