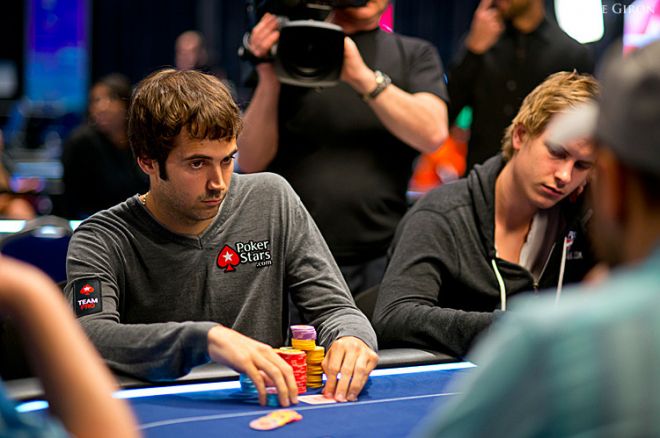 There are seven very happy players in Monaco on Tuesday evening, as the PokerStars and Monte-Carlo® Casino EPT9 Grand Final Super High Roller reached the money. Seven is way less than those who fell along the way and they are thinking about how much money they left behind. Team PokerStars Pro Jason Mercier led when 30 players remained last night and he leads with seven remaining tonight after a very profitable day saw him close with 4,165,000.

Two more players bought in Tuesday morning to take the total number up to 50 and they all helped create a prize pool close to the five million-Euro mark (€4,851,000). Samir Taouint drove in from France in his Ferrari and nearly missed the buy-in deadline after struggling to find a parking space this morning. Phil Ivey was the other player to stump up €100,000, his third bullet of the event, and the only one in for so much.

The top seven players will earn the following:

Mercier, rightly so, spent the whole day on the feature table and either watched or helped as players fell all around him. Igor Kurganov and Mikhail Smirnov went early before Mercier's great day was set up by a cooler of a hand that saw him elminate Faraz Jaka. Mercier flopped a set and managed to fade Jaka's open-ended flush draw to win a massive pot for that stage of the tournament. Mercier was in cruise mode (or "BeastMode" as he described it) for most of the day and only briefly lost the chip lead to Sorel Mizzi who was making a nuisance of himself at the outer table.

Ivey took his third bullet all the way to tenth place but that was as far as he went. He four-bet all in with ace-jack only for Mercier to call with ace-queen and hold. After his elimination the remaining players were moved onto the TV table but, as only seven places paid, the tournament went through a double-bubble period.

As all the remaining players were on one table, finishing in ninth seemed just as bad as eighth. It was high roller specialist, Fabian Quoss, who had to deal with busting in that spot and the lost of €200,000. Yet again it was Mercier who did the damage. He flopped top set in three-bet pot and faded Quoss' nut flush draw.

It took another two hours for the second stage of the bubble to burst and it ended up with Mercier busting another player. Erik Seidel was down to just four big blinds when he shoved with queen-eight. Mercier called from the big blind with ace-ten and flopped an ace to finish the day. All the remaining players are guaranteed a bumper €218,300 payday.

They will return tomorrow at 13:00 CET where a cards face-up live stream production will be in progress. As with the Main Event final table, the integrity of the tournament needs to be protected so there will be a one-hour delay on the stream and all updates appearing on PokerNews. That means our coverage will begin at 14:00 CET.