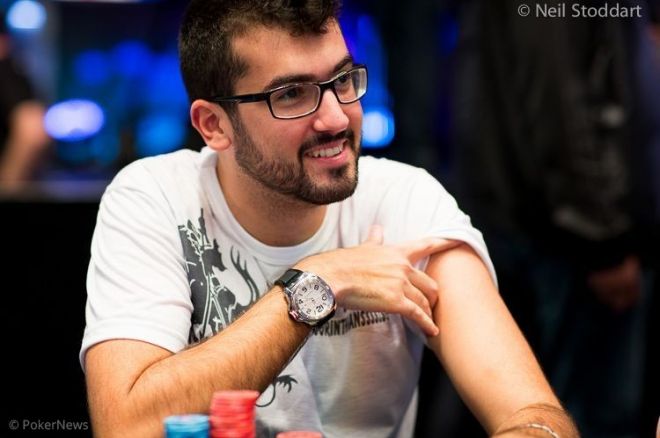 On Tuesday, the second starting flight of the PokerStars and Monte-Carlo® Casino European Poker Tour Grand Final drew a crowd of 423 hopefuls who all put up €10,600 to be a part of the spectacular Main Event. After eight 75-minute levels, LAPT Sao Paulo winner Victor Sbrissa was by far the overall tournament chip leader heading into Day 2 with 224,800 in chips. Big name pros Calvin Anderson (198,100), Andrew Lichtenberger (137,800) and Team PokerStars Pro Daniel Negreanu (88,600) all survived Day 1b with big stacks.

After a disappointing Day 1a turnout of just 108 players, it was clear early on that Day 1b was going to be a whole lot different. The hallways were packed, players were waiting in line to get a seat and the list of famous pros seemed endless. The list was shortened quite quickly as WSOP $10,000 PLO winner Jan-Peter Jachtmann, EPT Kiev winner and Team PokerStars Pro Max Lykov and former EPT Berlin winner Kevin MacPhee were all eliminated during the second level of play.

A table of death was established early on, as a murderer's row of top pros included Sam Trickett and Team PokerStars Pro Vanessa Selbst. From this table, Calvin Anderson had the best showing as he racked up 198,100 at the end of the day. Selbst, JP Kelly, Trickett and Russell Carson all busted.

While some had already given away all of their chips, others were still waiting to sit down. Phil Ivey entered late, as did Viktor Blom and Gus Hansen. Blom never got a hold of a big stack to play around with and he was eliminated toward the end of the day. Ivey had big swings throughout the day but he also did not manage to make it through. Both players are expected to play more events later this week as the €25,000 and €100,000 High Roller are still up for grabs.

Someone who will also be playing the bigger buy-ins is Patrik Antonius. The Finnish poker superstar will have plenty of time to rest up as he was also eliminated on Day 1. Antonius was very unlucky as he ended up all in with two pair and a flush draw on the turn against top pair top kicker. According to the PokerNews Odds Calculator, Antonius was a 95.45% favorite to double up, but the ace of hearts on the river gave his opponent a better two pair.

Shaun Deeb made his way over to the cash game area before the dinner break as he was eliminated by former EPT London winner Aaron Gustavson. There are a ton of cash games going on during the EPT Grand Final and many pros have been spotted at the tables already. Noah Schwartz was not ready to play cash games just yet as he managed to accumulate a lot of chips early on. Schwartz won a big coin flip and played his way up to 204,600.

There was no cruising today for Team PokerStars Pros Bertrand Grospellier, Chris Moneymaker and Nacho Barbero. All three were knocked out, and the former was even sent packing by teammate Marcin Horecki.

Annette Obrestad also had quite the day. Obrestad finished 13th in the Grand Final back in Season 5 and since then she has only managed to cash in two EPT events, both in London. Obrestad found aces against kings, hit quads against Scott Seiver and closed out the day with 56,800. Seiver did not survive the day.

Defending champion Mohsin Charania stared out slow and Kristy Arnett caught up with him on one of the breaks after which he managed to double up. Charania's back-to-back hopes are still alive as he closed out the day with 51,000 chips.

Be sure to tune back in to PokerNews.com Tuesday as we bring you all the live coverage of the second day of the EPT Grand Final! If you're playing the event you can also contribute to our coverage and keep your friends at home up to date with all your latest hands and chip counts by using the PokerNews My Stack app for both iPhone and Android users.