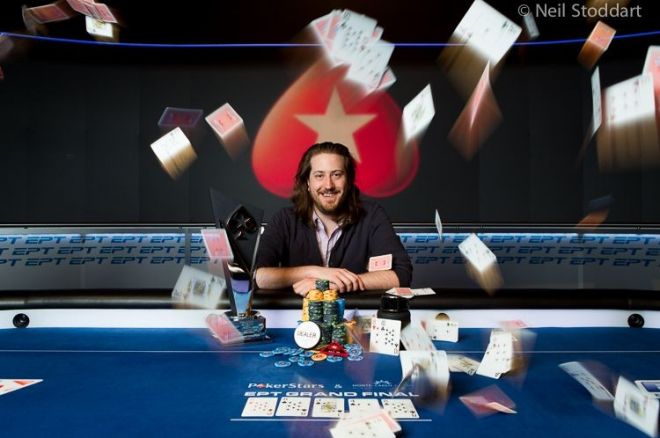 The first player at the final table to hit the road was Australian Grant Levy. Levy previously won APPT Sydney and ANZPT Melbourne but he would not add an EPT title to his list of achievements. Levy started the day as the short stack and was knocked out by Andrew Pantling. Pantling raised to 83,000 and Levy three-bet from his immediate left to 205,000. The Canadian proceeded to make the call and the flop rolled out jack-high with two clubs. Pantling check-called Levy's 400,000-chip shove and showed jack-ten of clubs, which led Levy's ace-king. The turn brought the ace of clubs and that sealed the deal. Pantling made a flush and knocked out Levy, who will take €103,000 back Down Under.

Team PokerStars Pro Jason Mercier was the short stack after Levy's departure but managed to double up soon after that. Unfortunately for the former EPT San Remo champ, though, he was unable to put those chips to good use. Mercier ended up all in preflop with queen-ten after Johnny Lodden raised from the cutoff to 80,000. Mercier was seated in the small blind and Pantling woke up behind him with ace-queen suited. The board did not bring any help and Mercier was gone in sixth cashing €137,000.

Pantling regained the lead after that hand as he and O'Dwyer kept battling it out for the top spot throughout the day. After a quiet hour the final table exploded as both Team PokerStars Pro Jake Cody and Noah Schwartz were knocked out on the same hand. Team PokerStars Pro Daniel Negreanu raised to 115,000 from the cutoff after which Schwartz moved all in from the button for 630,000. Cody moved in over the top for 860,000 total and Negreanu snap-called. The last remaining EPT winner, Cody, turned over jacks, Schwartz showed king-ten offsuit and both were far behind Negreanu's aces. The board brought mere blanks and Negreanu put himself in a great position for his first ever EPT title and the Triple Crown. Schwartz finished sixth for €189,000 while Cody took home €251,000 for his fifth place finish.

Pantling started four-handed play with a big chip lead over O'Dwyer, Negreanu and Lodden. The latter was the short stack but wouldn't remain in that position for long. Negreanu got Lodden to call all in with two nines against the Canadian's queens, but Lodden turned a nine to give him a set. Negreanu was now the short stack while Lodden jumped into second place. Not too long after that hand the WSOP APAC Main Event winner busted. Lodden raised to 110,000 with ace-queen of diamonds and Pantling called from the button with ace-seven suited. Negreanu grabbed this opportunity and moved all in for 2.775 million chips and Lodden made the call. Negeanu showed two fours and they did not hold up as Lodden rivered Broadway. Negreanu added €321,000 to his impressive live tournament poker resume. With this cash Negreanu jumps over Erik Seidel, Phil Ivey and Phil Hellmuth into third place behind the One Drop finalists Sam Trickett and Antonio Esfandiari on the all-time tournament winnings list. On the list excludes tournaments with a buy in $50,000 or higher, Negreanu was already occupied the top spot and he extended his lead on Hellmuth with this score.

Three-handed play was fast and furious, and it could've gone in anyone's favor. All three players had the chip lead at some point during the battle, but eventually Lodden had to let the other two go. First, Lodden called O'Dwyer's five-bet shove with queen-ten and he was up against two sixes. The board did not improve Lodden's hand, and he was knocked down to below 2 million. Shortly after that massive pot, Lodden was knocked out by O'Dwyer. O'Dwyer raised to 150,000 with ace-ten and Lodden three-bet to 400,000 with ace-jack. O'Dwyer tanked for a bit and called. The flop was seven-four-ten rainbow and Lodden fired out 350,000, O'Dwyer called. On the turn the three of spades showed up and Lodden moved all in for 1,450,000. O'Dwyer snap-called with top pair top kicker and the river brought a meaningless king of diamonds. Lodden won €467,000, marking the biggest single result in his live tournament poker career. Lodden jumped into third place on the Norwegian all-time money list behind Annette Obrestad and Jan Sjavik.

After the dinner break, it was all O'Dwyer as he extended his lead right away by winning a massive pot. O'Dwyer raised to 240,000 from the button and Pantling three-bet to 800,000 with six-three off suit. O'Dwyer called with ace-ten and the flop brought ace-eight-three rainbow. Pantling bet 975,000, O'Dwyer called, and the turn brought the queen of clubs. Pantling fired a second bullet worth 1,575,000, and O'Dwyer called once again. The river brought another ace and both players checked. O'Dwyer took down the massive pot and took an almost two-to-one chip lead.

On the final hand of the tournament, O'Dwyer raised to 240,000 with ten-eight off suit and Pantling called from the big blind with king-five of spades. The flop brought two eights but also two spades giving Pantling a flush draw. Pantling check-called 300,000, and the turn brought the four of spades, giving the Canadian a flush. Pantling check-raised a 600,000-chip bet to 1,425,000, and O'Dwyer decided to move all in. Pantling called immediately, risking his tournament life. In an unbelievable turn of events, the eight of clubs hit the river and O'Dwyer turned his trips into quads. Pantling was knocked out and took home €842,000 for his second place finish. After making four EPT final tables in just 18 months, O'Dwyer managed to take one down and he won the €1,224,000 first-place prize.

The Main Event is finished, but the poker continues on Monday at 12:00 CET with the €100,000 Super High Roller. Among the players expected to participate include Phil Ivey, Patrik Antonius, Viktor Blom, Negreanu and the new champ O'Dwyer.