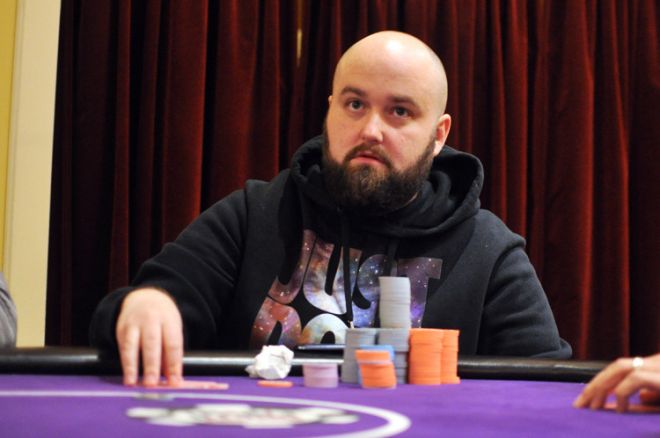 Of the 126 entrants, 62 players returned for Day 2, joined by two-time WSOP bracelet winner and late registrant Jason Mercier. Unfortunately for Mercier, he was cut short of the money, but not before he booked a profitable last longer bet with Jason Koon. Koon ran into Austin Buchanan’s aces on the first hand of the day, and was eliminated shortly thereafter.

Despite being the last to register, Mercier also outlasted his friends Brent Hanks and Kyle Julius. Hanks lost a series of hands leaving him short-stacked, leading him to jam out of the small blind with nine-five off suit. Joe Tehan looked him up with pocket sevens and held. Julius lost a massive pot against Blake Barousse, where both players turned a flush. Unfortunately for Julius, Barousse held the nuts, and the Chicagoan was sent packing.

Vornicu, the Harrah’s Rincon Casino Champion, five-bet all in for 145,000, and Tim Bowman, winner of the Harrah’s Cherokee Main Event, re-shoved. The rest of the table folded, and Vornicu rolled over two red jacks only to see Bowman’s black aces. The aces held, and Vornicu was eliminated.

The bubble burst shortly thereafter when Steve Hesse five-bet shoved with two jacks. Parker, who was the four-bettor, was pot committed, and called with king-queen. He flopped a pair of queens and held when the turn and river both produced bricks.

The first players to exit in the money were Sam Panzica, Andrew Robinson, Jim Willerson, and Jarod Ludemann.

Willerson was eliminated in a wild hand in which Hilton opened for a raise, Willerson three-bet shoved, and Steinberg put in a cold four-bet. Hilton five-bet shoved, Steinberg quickly called, and all three hands were tabled.

Hilton held as the board came

The next three players to go were Ashly Butler, Rex Clinkscales, and Pavlin Karakikov.

Karakikov was in great shape to double up with two kings against Steinberg’s ace-ten, but Steinberg made Broadway on the turn. Karakikov needed the board to pair or a fourth diamond to complete the board, but the river was a meaningless black three, and the final nine players combined to make an unofficial final table.

On the final hand of the night, Austin Apicella was eliminated in ninth place, bubbling the ESPN televised final table. After losing a small pot to Ausmus, he then three-bet shoved over an open from the Octo-Niner. Ausmus called with two jacks, which dominated Apicella’s king-jack. Apicella received no help from the five community cards and was left collecting his $30,785 payday from the payout window.

The final eight players will return on Friday at 2 p.m. to fight for the top prize of $355,599 and the first 2013 WSOP gold bracelet to be awarded on American soil. Be sure to check back to PokerNews.com for all of your up-to-the-minute updates straight from the tournament floor.