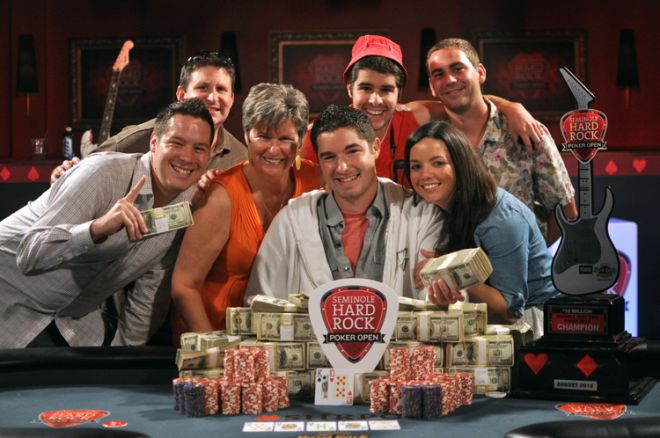 Greg Lehn started the day last in chips with just 14 big blinds, and was the first player to exit. On the 12th hand of the final table he found himself all in preflop with

of Bonomo. Bonomo held as the board ran out six-high, and Lehn hit the rail.

Just three hands later, Samuel Bernabeu Guilabert was eliminated. Mukul Pahuja opened on the button, Guilabert three-bet from the small blind, and Bonomo made it three bets. Pahuja folded, Guilabert called all-in with two deuces, and he discovered Bonomo’s pocket queens had him crushed. Guilabert turned a gut-shot wheel draw, but the river bricked off, and he was eliminated.

, but Hinkle hit a queen on the flop and the turn to make trips to eliminate Qartomy.

Three-handed play lasted only six hands, and on Hand #56 Pahuja opened to 550,000 on the button. Bonomo three-bet to 1.5 million in the small blind, Pahuja moved all in for 7.45 million, and Bonomo called. Bonomo’s

, and the flop, turn, and river all produced blanks.

For the next 167 hands, Hinkle and Bonomo battled heads up. Hinkle started with a slight lead, and extended it, but Bonomo started to narrow the gap. On the 96th hand, both players made a straight, but Bonomo’s nine-high straight bested Hinkle’s eight-high straight, and suddenly Bonomo had a more than two-to-one chip lead.

It was Hinkle’s turn to mount a comeback, and slowly but surely he climbed back. After nearly evening things up in Hand #151, forcing a fold from Bonomo in a big pot, Bonomo distanced himself once again. The two then played the first all-in pot of heads-up play on Hand #183, but it was anticlimactic as the two players both held ace-three.

The next all-in pot happened three hands later, and this time Hinkle doubled with aces against Bonomo’s middle pair. The two passed the chip lead back and forth for the next few hands, and once again Bonomo found himself with a three-to-one advantage. Hinkle doubled for a second time, getting the rest of his chips in the middle with pocket sixes against Bonomo’s pocket deuces, and a dozen hands later Hinkle was in the lead once again.

Finally, on Hand #223, it was over. Bonomo check-jammed on a board of

, and Hinkle snapped it off with

for the nuts. Bonomo was drawing dead with

, and the two competitors shook hands.

Congratulations to Hinkle, the winner of the first ever $10 million guarantee for $1,745,245, and of course, the guitar. Bonomo also deserves credit for showing off his supreme skills in this near six-hour heads-up battle.

This concludes PokerNews’ coverage of the Seminole Hard Rock Poker Open, but be on the lookout for updates from the European Poker Tour Barcelona stop, which begin this weekend.