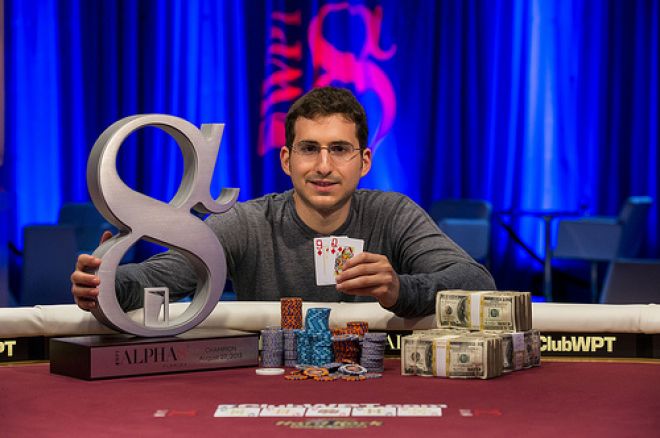 The inaugural World Poker Tour Alpha8 $100,000 buy-in event, sponsored by ClubWPT.com, continued at the Seminole Hard Rock Poker Open on Tuesday as the remaining nine players from a 21-entry field returned to play to a winner. After seven levels of action, Steven Silverman walked away with the title, taking home $891,660 after defeating 2013 World Series of Poker November Nine chip leader JC Tran heads-up.

This marks the second high roller victory for Silverman this year. In May, he won the €25,000 High Roller at the 2013 PokerStars and Monte-Carlo® Casino European Poker Tour Grand Final for €775,400.

According to the WPT Live Reporting Team, it took just nine hands for the first elimination of the day to occur. It happened in Level 12 (2,500/5,000/500) when Isaac Haxton opened for 10,000 from the button only to have Bill Perkins move all in over the top for 82,000 from the big blind. Haxton called and the cards were turned up.

According to the PokerNews Odds Calculator, Haxton was a 54.73% favorite while Perkins would come from behind to win 23.98% of the time. The

flop was fairly kind to Perkins in that he would chop 60.10% of the time with any card higher than an eight. Unfortunately for him, the

turn paired Haxton and made him an 88.64% favorite. Perkins could only chop with either an ace or queen on the river, but it wasn’t in the cards as the

blanked. With that, Perkins took his leave and the official final table was set.

On Hand #4, Tran managed to double through Jason Mercier, and then nine hands later the two were back at it. It happened when Tran opened for 11,000 from the button and Mercier three-bet to 25,500 from the small blind. After the big folded, Tran moved all in and Mercier couldn’t call fast enough with the

and was in dire straits. The

flop made things interesting as it gave Tran a flush draw, but the

turn didn’t complete it. Tran needed a spade on the river, and he found one when the

Three hands later, Mercier moved all in from the hijack for 61,500 and Daniel Alaei called from the button. The blinds folded and Mercier tabled the

, which was behind the

flop was gin for Mercier as it gave him two pair, though Alaei was left with a gutshot straight. The

turn gave Alaei some more outs, and he found one when the

peeled off on the river. Just like that, Mercier, who began the day second in chips, was out in eighth place.

After Alaei fell in seventh when his

failed to overcome the

of Haxton in an all-in preflop confrontation, Joseph Cheong joined him on the rail in sixth. It happened on Hand #93 of the final table in Level 15 (5,000/10,000/1,000) when Jeff Gross opened for 20,000 from the button and Cheong defended from the big blind. When the flop came down

Cheong got it in good with two pair, but Gross was drawing live to a flush draw. The

turn completed the said flush, and the

river wasn’t what Cheong needed to retake the lead.

Just busted 6th in the alpha8 2 pair to flush draw. Fun final table and gl to everyone still in

but was racing against Tran’s

gave Tran the lead with a pair of queens, and suddenly Haxton was in need of either a ten or jack to stay alive. The

turn wasn’t it and neither was the

river. Haxton, who had re-entered on Day 1, exited on the money bubble in fifth place.

On Hand #137, the start-of-the-day chip leader, Matt Glantz, moved all in for 262,000 from the small blind and received a call from Gross in the big. Glantz flipped over the

and needed to improve to overcome the

of Gross. Unfortunately for him, the board ran out

failed to overcome the

of Silverman after the board ran out

Silverman and Tran basically began heads-up play even in chips and seemed plenty deep, but it only took 10 hands to determine a winner. On Hand #152, Silverman doubled when his

held up against the

of Tran. Three hands later, Silverman shoved the button and Tran called off for 150,000 or so.

gave Tran the lead, but it was temporary as the

turn gave it back to Silverman. The

river gave both players two pair, but Silverman’s queens and nines were best. Tran received a $526,890 consolation prize for his runner-up finish while Silverman took home $891,660 and the title of the inaugural WPT Alpha8 champion.