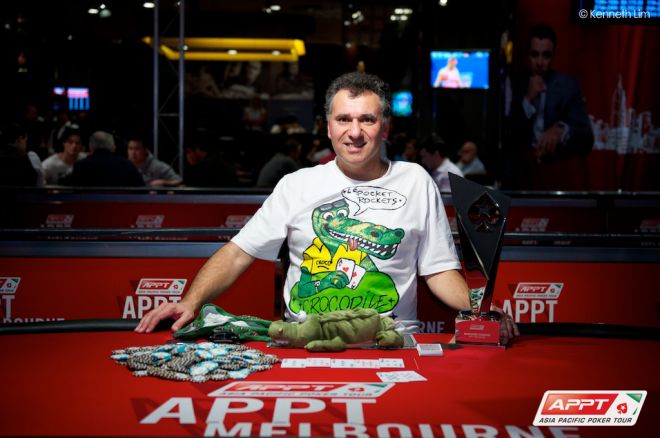 Argyros is one of the original inductees in the Australian Poker Hall of Fame and has a poker resume which includes tracked results in each of the last four decades. Now, in 2013, Argyros has taken down one of the most prestigious titles in the country and his second largest career score.

“I haven't won a tournament since Cleopatra was skiing down the Nile!” quipped Argyros after he took down the title and $134,500 following a three-handed deal.

When the APPT Melbourne Main Event final table began at midday local time, everyone was expecting it to be a very long day in the Crown Poker Room. Then, within the first hour, four players had been eliminated.

The first player to find the rail was short stack Jazz Mathers. Starting the day with around five big blinds, Mathers was happy to look down at

early in the action and get all his chips in. Mathers had to come up against Ravi Maravar’s

Despite picking up extra chips when he eliminated Mathers, Maravar would be the next player to exit. Maraver first lost most of his chips when he ran his

, then lost the rest of them all in preflop holding

. Billy Argyros looked down at

in the big blind and made the call. No help came for Luu and it was all over in seventh place.

Six-handed play would become five-handed very quickly as 2013 Aussie Millions runner-up Joe Cabret couldn’t turn his Day 3 “chip and a chair” story into a victory. Cabret’s final hand was a flip that he couldn’t win as his

At this point Robert Demalian was still in contention and looking good to find another big result after making a deep run in this year’s WSOP Main Event. However, Demalian was ousted in fifth place when he was all in preflop holding the

and couldn’t stay ahead of Bowdy Tolhopf’s

Mason started the day as the chip leader, but seemed to be card dead and could never really get anything going. Eventually Mason found himself all in preflop holding the

The players were fairly deep stacked at the time of the deal and so it wasn’t too surprising that it would take around four hours to reach heads-up play. In the end, third place went to Yan after he took an unfortunate beat. Yan's

was all in preflop against Tolhopf’s

, and he couldn’t stay ahead as a

board was spread on the felt.

of Argyros. The final five cards spread on the felt for this tournament were

, and with that Tolhopf was sent home in second place, while Argyros was the champion!